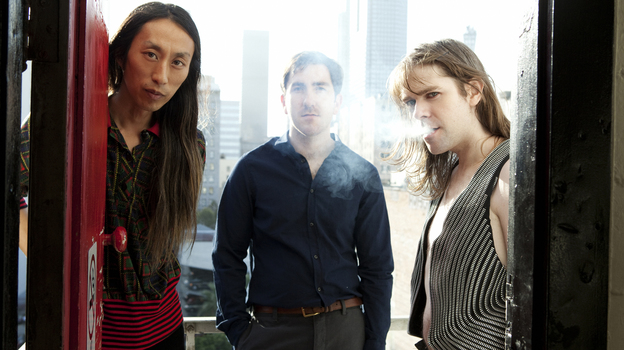 Weirdos are having a moment in music. From the obsession of indie bands with psych-inflected forms to the surreal costumes and antics of pop superstars, it seems like everyone’s trying to claim the mantle of weirdest-of-all. But Ariel Pink makes most of the rest look like pale imitators. Pink spent years beneath almost everyone’s radar, making ultra-low-fi home recordings, which garnered him a cultish fanbase but little mainstream recognition, before bursting into the (relative) spotlight with 2010’s Before Today, a richly produced album full of songs—many of which had appeared earlier in lower-fi versions—that seamlessly hopped among styles and genres. With Mature Themes, Pink takes his brand of weird-pop a step further, with a set of even more intricately bizarre gems.

“Is This the Best Spot” opens with a driving beat and robotic voiceover before launching into a chorus of “step into my time warp/step into my time warp/step into my time warp now.” It sounds like a house-of-mirrors version of a Girl Talk mashup—in fact, most of these songs resemble one. The title track is a sweetly earnest piece of gauzy soft rock with stream-of-consciousness lyrics and a rapturous synth melody, while “Nostradamus & Me” is seven-and-a-half minutes of beautifully swirling ambient noise. “The Early Birds of Babylon” sounds like the theme to a fantasy TV series from the ’80s, with a heavy dose of death metal for good measure: “Satan explodes,” a voice intones over dungeon-y guitars and a dark bassline

In the innocently titled “Symphony of the Nymph,” the nymph in question is actually a discotheque-frequenting lesbian nymphomaniac, a disclosure that’s somehow perfect when juxtaposed with the gorgeously lush, tremulously grandiose organ chords that anchor the song. The cool, brisk bassline of “Driftwood” draws you into a darkly contemplative state, while the opener, “Kinski Assassin,” recalls the Doors with its electric organ but something else when it quotes Casablanca.

In other hands, the mixture of material Pink works with might be a disaster, a cacophony of disorganized noise and half-baked ideas. But Pink has an astonishing talent for pairing dissimilar sounds and juxtaposing unexpected components in a way that rarely, if ever, feels jarring or strained. However much he distorts and twists the forms he appropriates, Pink’s sincere appreciation of them shines through, while a mischievous air pervades even the most traditional songs.

And they do exist: The album’s first single, “Baby,” is a surprisingly orthodox cover of an R&B-tinged slow jam first recorded by Donnie and Joe Emerson in 1979. Pink plays this one straight, with a version that calls to mind both Michael Jackson and Marvin Gaye. The second song he released from this album, “Only in My Dreams,” is sunny and upbeat with Byrds-esque vocal harmonies and twinkling chords, wholesome pop lyrics, and a gentle melody—a remarkable piece of pop whose lightness belies the skill involved in its crafting. It’s as if Pink threw it in just to show that he could, in fact, write anything he wanted.

Good as those songs are, they’re outliers. Anyone compelled to listen to the whole album on the basis of those two early releases are in for a surprise when they get to tracks like the static-laden, jingly “Schnitzel Boogie” (sample lyric: “I’m eating schnitzel/I’m eating schnitzel”), which works despite—or perhaps because of—the fact that half the track consists of a buzzy voice singing the word “schnitzel” repeatedly atop a heartbeat-like rhythm.

So, yeah, it’s probably wise to acclimatize yourself to Pink via his more accessible songs—he’s an artist, and Mature Themes an album, that requires some getting used to. But don’t give up: Mature Themes gets better and better with repeated listens, as otherworldly whines and horse snorts and YouTube snippets and jokey lyrics and whispered lines emerge from the rich tapestry of sound. And fortunately, repeated listening isn’t a major chore, since the album’s catchy as hell—Ariel Pink may make weird music, but damn if he’s not good at it. To borrow a phrase, if America were a nation of reclusive pop culture obsessives, Ariel Pink would be Lady Gaga.