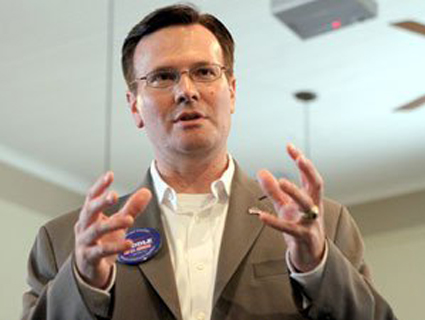 In mid-May, Texas Republican congressional candidate Wes Riddle posted a new note on his Facebook page. It was written by his spokesman, Garrett Smith, and it was dire. “The reasoning for President Obama’s impeachment,” Smith wrote, “begins with the fact that the State Department is giving away seven strategic, resource-laden Alaskan islands to Russia.” According to the statement, Riddle—who has Rep. Ron Paul’s endorsement and stands a good chance of winning in November if he can make it out of next Tuesday’s runoff—believed that Obama’s unprecedented giveaway included at least one island the size of Rhode Island and Delaware combined, “billions of barrels of oil” from offshore deposits, and unknown strategic advantages.

“The agreement was negotiated in total secrecy, not allowing the state of Alaska to participate in the negotiations, and…the public was not given any opportunity to comment,” he wrote.

There were a few problems with this indictment of Obama: The president hadn’t given away any islands; the treaty in question had been signed by President George H.W. Bush in 1991; none of the islands, which are well on the other side of the international boundary, had ever been officially claimed by the United States; and Alaska’s two US senators at the time had publicly endorsed the measure. Smith’s rant, much of which was copied word for word from a WorldNetDaily article, was based on a falsehood.

Riddle, an Army veteran turned West Point instructor turned historic-theater owner, isn’t merely another commenter on the internet. He could be coming to Washington. A few days after this Facebook post on the Alaskan islands, he pulled in 15 percent of the vote in a crowded GOP primary for Texas’ 25th Congressional District, a solidly red splotch of central Texas that went to John McCain by 10 points in 2008. That was good enough to vault Riddle into next Tuesday’s runoff election. Riddle will take on Republican Roger Williams, a former Texas secretary of state who now owns a car dealership (more on that later) and a donkey ranch. The winner will almost certainly be the district’s next congressman. 2010 may have been the year of the tea party, but Riddle’s candidacy, backed by Paul and local activists, is a sign it’s not going away.

In addition to the Alaska island giveaway, Riddle has called for Obama to be impeached for signing the National Defense Authorization Act and for appointing Richard Cordray to head the Consumer Financial Protection Bureau when Congress was on recess. “President Obama stated publicly that he would not allow a handful of Republicans to stop him from doing what he desires,” Riddle wrote of the Cordray appointment. “That ‘handful’ of Republicans are the elected representatives of the people, empowered by the Constitution to approve or deny appointments to high offices.”

On his personal blog, Horse Sense, Riddle muses on a range of subjects, from the importance of Flag Day to the value of entrepreneurship. In April, he penned an 800-word op-ed on the supremacy of Western civilization, noting, “Western civilization has produced the height of all civilizations in certain respects, to include literature. As Saul Bellow pointed out a few years ago, there ain’t a Tolstoy of the Zulus or a Proust amongst the Papuans.”

Western civilization wasn’t perfect, Riddle explained, but it was better than the alternative. “I don’t want America to be a microcosm of the world, if by that you would include all the ignorance, ugliness, vice and corruption that are present in the world—chiefly (though not exclusively) from non-Western imports.” Besides, he noted, even our worst moves had unintended benefits. “Slavery in America was clearly harmful and wrong to the people who lived under it, but it proved to be the unintended transmission belt that brought Africans into the orbit of Western freedom,” he wrote. “Are the descendants of slaves really worse off? Would Jesse Jackson be better off living in Uganda? Would we? (Don’t answer that).”

If anything, though, Riddle’s out-there views have only endeared him to tea partiers. In early July, Riddle picked up a big endorsement from Paul, the Texas congressman whose two presidential campaigns have produced an army of libertarian-minded activists. “Liberty voters have a strong choice in this CD-25 Republican runoff,” Paul said in a statement. “I hope my generous supporters will help Wes win this runoff because we need more men like him.” Like Paul, Riddle’s criticized public programs like Social Security and food stamps, and holds an outsized view of the powers delegated to the states under the 10th Amendment.

Still, Williams isn’t conceding much ground. The Austin American-Statesman reported in July that he was sending out direct mail fliers blasting Obama’s 2009 economic stimulus for, among other things, subsidizing “pancakes for yuppies” in Washington, DC—a reference to the recently opened Columbia Heights IHOP. (The Statesman affirmed that Columbia Heights is full of yuppies, but it noted that the money had been invested through a community economic development grant and created full-time 70 jobs.) Williams’ first campaign ad featured him lecturing a herd of donkeys from his ranch about conservative values while reading from a copy of his pocket Constitution.

In response, Riddle has attacked Williams as a phony conservative for publicly opposing the auto bailout while privately profiting from it. As Riddle noted, Williams’ wife, Patty, traveled to Washington to lobby on behalf of their car dealership.

Riddle’s biggest asset isn’t Paul; it’s the calendar. As the Texas Tribune‘s Ross Ramsey noted, turnout for midsummer runoffs tends to be abysmal. Usually about half the number of people who show up for the primary turn out for the final vote—which would mean about 5 percent of eligible voters in this case. So Riddle only needs about 19,000 votes to clinch the nomination and all but assure a trip to Congress. Runoffs tend to favor candidates with high levels of support from political activists. Riddle, who founded the Central Texas Tea Party, fits the bill.

For Riddle, the stakes couldn’t be greater. In February, Riddle, who asserts that states have the authority to nullify federal laws they consider to be unconstitutional, posted an item on Horse Sense warning that Americans’ freedoms were being snuffed out in the name of well-meaning reforms like child labor laws, and no one was willing to do anything about it. “I JUST WISH THE GOVERNMENT WOULD LEAVE US ALONE,” he wrote, bursting into all-caps. But he feared Americans had grown too complacent. “[I]s another Robert E. Lee or Jeff Davis left anywhere in this unified, chained and tethered house of ours—locked down from the inside out?,” he wondered. “Is there a governor with backbone anywhere in the country to point out and even put an end to…(shall I name it? Are you willing to recognize it?). Tyranny.”

Come next January, he might just be a congressman.