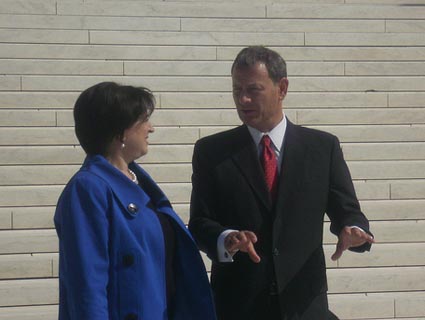 While being attacked as a “traitor” by conservatives, Chief Justice John Roberts is enjoying a bit of a boomlet with liberals for voting to uphold most of the Affordable Care Act. But Roberts will soon get a chance to prove himself to conservatives once again, as Politico‘s Josh Gerstein reports:

The chief will have plenty of chances to make his mark in the next term. Already, the justices are planning to delve into the politically charged issue of affirmative action. They may well add hot-button disputes over same-sex marriage rights and voter ID laws. And the court could even take up the constitutionality of the landmark law Congress passed nearly half a century ago to guarantee African-Americans equal access to the polls: the Voting Rights Act.

Roberts has been deeply hostile to the federal government’s efforts to rectify racial inequality. Among his first big cases as chief justice was invalidating a school integration program with the tautological phrase, “The way to stop discrimination on the basis of race is to stop discriminating on the basis of race,” as though there were any effective way to address racial imbalances without considering race. The high court came within a hair of striking down parts of the Voting Rights Act with the conservative justices issuing an implicit warning that they would not hesitate to do so should another challenge reach them. It seems unlikely that Roberts will give one of the most important pieces of legislation in history, the law that finally guaranteed black Americans’ access to the franchise, another stay of execution. And having voted to uphold the Affordable Care Act, conservative outcomes in these cases would be insulated against liberal criticisms that the court has become politicized.

While conservatives are bashing Roberts, Justice Anthony Kennedy’s star is on the rise on the right thanks to his vote to strike down the Affordable Care Act. An upcoming case over gay marriage may determine whether his improved reputation among conservatives will endure. Republicans have appealed to the Supreme Court to hear a challenge to the Defense of Marriage Act, an issue on which Kennedy, who wrote the 2003 opinion striking down anti-sodomy laws in Lawrence v. Texas, is expected to be the swing vote. Perhaps conservatives think they win either way: If part of DOMA is struck down, religious conservatives will be more likely to flood the ballot box in November; if it’s upheld, then DOMA’s federal definition of marriage that excludes same-sex couples remains the law of the land.

Republicans may believe that Kennedy’s vote to strike down the Affordable Care Act is a sign of a newly permanent allegiance to the court’s right-wing bloc. My colleague Kevin Drum certainly seems to think so, having written that “it’s really not correct to think of Kennedy as a centrist anymore.” It was never really proper to view Kennedy as a centrist rather than a conservative. But Drum is being pessimistic, and Republicans cocky, if they think Kennedy is now a clone of Justice Antonin Scalia, whose recent opinions owe more to Fox News than James Madison. The same judicial philosophy that led Kennedy to join with the Democratic appointees to strike down most of Arizona’s draconian immigration law and find mandatory juvenile life without parole unconstitutional could also lead one to see the individual mandate as an unconstitutional infringement on personal liberty. It could also cause Kennedy to view DOMA as a prime example of federal overreach. Kennedy has always been a conservative with a bit of a libertarian streak.

The cases likely to come before the court in the near future will provide plenty of opportunity for Roberts to restore his standing with conservatives and for Kennedy to remind liberals that he’s no Scalia. As with the Affordable Care Act case, however, it’s anyone’s guess how they’ll actually turn out. Thanks to Roberts’ vote to uphold Obamacare, the high court has a newfound legitimacy that will make it difficult to decry the results as partisan.