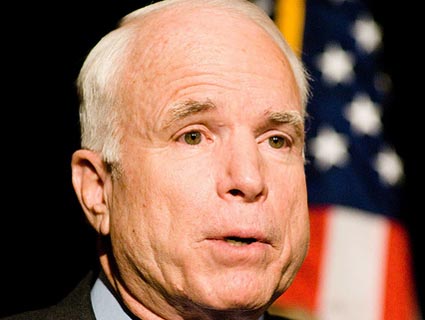 Senator John McCain (R-Ariz.) took to the floor of the Senate Wednesday to defend Secretary of State Hillary Clinton adviser Huma Abedin, whom he refers to as a friend, from Rep. Michele Bachmann’s (R-Minn.) baseless accusations that Abedin is an agent of the Muslim Brotherhood, an Islamist organization with branches throughout the Middle East.

McCain absolutely lays into Bachmann and her colleagues (without mentioning them by name), defending Abedin as representing “what is best about America: the daughter of immigrants, who has risen to the highest levels of our government on the basis of her substantial personal merit and her abiding commitment to the American ideals that she embodies so fully.” Here’s an excerpt from his speech:

Ultimately, what is at stake in this matter is larger even than the reputation of one person. This is about who we are as a nation, and who we aspire to be. What makes America exceptional among the countries of the world is that we are bound together as citizens not by blood or class, not by sect or ethnicity, but by a set of enduring, universal, and equal rights that are the foundation of our constitution, our laws, our citizenry, and our identity. When anyone, not least a member of Congress, launches specious and degrading attacks against fellow Americans on the basis of nothing more than fear of who they are and ignorance of what they stand for, it defames the spirit of our nation, and we all grow poorer because of it.

McCain’s speech is all the more remarkable because it represents a tragically rare instance in which a Republican elected official has chosen to fight the anti-Muslim paranoia in his own party, rather than simply ride the wave. There are a few other examples, including Senator Orrin Hatch’s (R-Utah) stand during the debate over the so-called “Ground Zero Mosque,” but not many.

Nevertheless, McCain inexplicably also defends Frank Gaffney, the head of the Center for Security Policy, as a “friend” despite the center’s role in providing “empirical” support for the absurd conspiracy theory that American Muslims are secretly trying to impose Taliban-style Islamic law on the United States. It’s Gaffney’s scurrilous reasoning masquerading as policy expertise that lead to Bachmann’s smearing of Abedin in the first place.