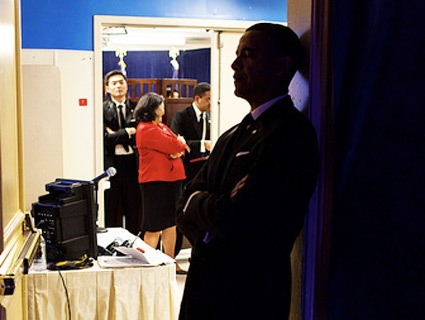 Summers stink for Barack Obama. Last July, the jobs report noted that only 18,000 jobs had been created the previous month. The summer of 2010 saw a dramatic decline in job creation. Today, the news is that the economy only birthed 80,000 jobs last month—far below the expected (or desired) level.

For Obama and White House aides—and the rest of us—it’s been like Groundhog Day. Every year (with the exception of 2009) seems to start with whiffs of economic promise, and the president’s economic advisers come to believe that the economy will finally—finally!—get a real lift. But by springtime, hopes are dashed—often partly because of European economic woes. And the rest of the year is spent explaining (which didn’t work too well in 2010) and exhorting Republicans in Congress to act by not blocking action (which worked only marginally in 2011).

So what’s the president’s game plan now? A month ago, he held a press conference about the not-great jobs report of that moment and slipped up with his doing-fine remark about the private sector. But, more important, he spent much of that press conference in his most professorial mode discussing European financial troubles, while issuing a far from full-throated cry for the GOPers to pass the leftover portions of the jobs bill he had proposed the previous September. There was nothing rousing in his remarks and not a lot to give an anxious voter reason to believe in Obama’s ability to juice up the economy.

With this dismal report, the instant conventional wisdom is that Obama will have to dial up the attacks on Mitt Romney in order to render Romney an unacceptable choice for voters who might otherwise select him as a way to vent their anger or disappointment with Obama and the economy. That’s probably right. But it wouldn’t hurt if Obama displayed more signs of fierce economic leadership. Reminding voters that he saved Detroit and perhaps the whole frickin’ economy may not be enough. Obama likely needs to present vigorously a forceful create-jobs-now plan.

It’s easy to throw advice at a president. Obama and the folks running his campaign are pretty darn smart. But it’s clear they’re not going to get much help this campaign season from external economic conditions. They will have to maximize all lines of argument: what’s wrong with Romney, what Obama has achieved, and what Obama can do for the country if granted four more years. This jobs report is a reminder that the president needs to step it up on the latter.