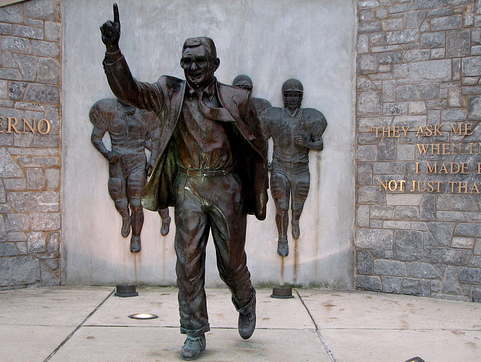 In a July 13 blog post, a writer for the The Chronicle of Higher Education‘s Innovations blog wrote a post that was ostensibly about the child sex abuse scandal at Pennsylvania State University and the school’s complicity in covering it up. But the blogger, Peter Wood, didn’t stop there. He went on in the piece to compare it to how the school has handled the work of one of its climate scientists.

He refers in the piece to the work of Michael Mann, the director of the Earth System Science Center at Penn State, who has been on the receiving end of a variety of attacks over the years, including the smear campaign resulting from emails that were stolen and put online in the fake scandal known as “Climategate.” Wood uses the fact that a university investigation into “Climategate” (not to mention at least six other investigations on the subject conducted by outside institutions) exonerated Mann from allegations that he’d falsified data or hidden information as proof that there is “a culture of evasion” at the school. “Penn State has a history of treading softly with its star players,” Wood writes. “Paterno wasn’t the only beneficiary.”

In case that wasn’t clear, Wood is comparing how the university has responded to the research of a well-regarded climate scientist whose work is well within the mainstream to the university’s effort to cover up a serial child rapist. He does make a point of saying that his other examples have “no direct connection to the Sandusky scandal” before going on to compare them just the same.

Wood has previously made it clear that he doesn’t agree with mainstream climate science, scientists, or people who defend them; see here and here. But this seems to take things a bit farther.

Of course, it is an opinion blog, and writers are entitled to write about their opinions. But The Chronicle‘s editors have previously stated that they do still hold opinion bloggers to certain standards—standards that one might assume don’t allow a blogger to compare a scientist to a child rapist. A few months ago, The Chronicle drew fire after blogger Naomi Schaefer Riley posted a piece suggesting that universities get rid of black studies and saying all kinds of not-very-nice things about people’s dissertations based on their titles. At first editors at the paper stood by it, but after a week, the Chronicle published a mea culpa stating that the post “did not meet The Chronicle’s basic editorial standards for reporting and fairness in opinion articles” and the writer had been fired.

Wood had already hedged his bets on this sort of issue, posting a blog shortly after the Naomi Schaefer Riley incident explicitly that he feared her dismissal might mean that the same could happen if “someone mounts a campaign of vilification against me” based on his writing on a “controversial topic.”

I asked The Chronicle‘s editors about the post. Here’s what editor Liz McMillen wrote in response:

We don’t think Peter Wood’s post “equates” the sexual assault of children to the investigation of Michael Mann. Wood is describing what he sees as the culture of secrecy and cover up at Penn State during Graham Spanier’s years as university president. The consequences of that culture were most apparent and terrible regarding Jerry Sandusky, but in Wood’s view, “The underlying culture that made this heedlessness possible among the senior officials extends to quite a few topics that have no direct connection to the Sandusky scandal.” Wood also cites changes in the university policy on academic freedom and Spanier’s attempts, at a public university, not to disclose his and Paterno’s salaries as evidence of that culture.

And it should be pointed out that this is Wood’s opinion; as we clearly state, posting on a blog does imply any endorsement of these views by The Chronicle.

Others in the climate science community have responded to what they call a “smear” in a “highly respected venue” like The Chronicle. You can read Wood’s original post and decide for yourself.

UPDATE: Looks like bloggers from both the Competitive Enterprise Institute (CEI) and the National Review Online have also jumped on board this meme, calling Mann “the Jerry Sandusky of climate science.” Mann’s lawyer has asked NRO to retract the blog post and apologize.