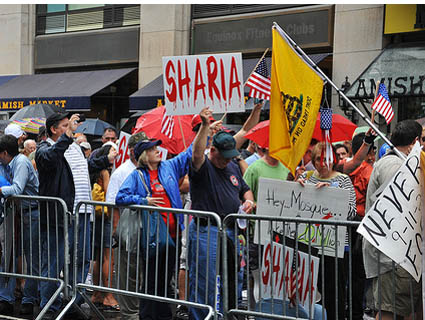 Months after dismissing contributors John Derbyshire and Robert Weissberg for expressing flagrantly racist views, National Review is publishing a writer who suggested blacks are “the most murderous of peoples” and declared that “there’s a reason the founding fathers did not give women or black slaves the right to vote.”

David Yerushalmi is perhaps best known as the author of model anti-Shariah legislation that has been pushed by Republican state lawmakers across the country. Yerushalmi once proposed blocking “Shariah-adherent” immigration into the US and making it a “felony punishable by 20 years in prison to knowingly act in furtherance of, or to support the, adherence to Shariah.” Since any observant Muslim could be considered “Shariah adherent,” this language could apply to any religious Muslim.

As my colleague Tim Murphy reported last year, Yerushalmi has expressed an array of controversial views on race. “Some races perform better in sports, some better in mathematical problem solving, some better in language, some better in Western societies and some better in tribal ones,” Yerushalmi explained in a 2006 essay. The Anti-Defamation League describes Yerushalmi as having a “record of anti-Muslim, anti-immigrant and anti-black bigotry.” Though he is Jewish, he’s no fan of liberal Jews either, having compared them to “a fatal parasite,” according to the ADL. As Think Progress’ Matt Duss noted, Yerushalmi also once wrote that “Jews of the modern age are the most radical, aggressive and effective of the liberal Elite.” (Thanks?)

At National Review, Yerushalmi is currently debating conservative writer Matthew Schmitz, who has made the perfectly reasonable argument that anti-Shariah laws at best “solve” an issue that doesn’t exist (the implementation of Taliban-style Islamic law in the United States) and at worst could be used to restrict the religious freedoms of Americans who are not Muslim as well. Worst of all, Schmitz worries that “the anti-sharia movement’s implication that all Muslims are radicals amplifies resentments and fuels hate by encouraging Americans to view their neighbors with suspicion and distrust.” He is hopelessly outnumbered at National Review, where many of the writers and commenters weighing in are confused at Schmitz’ inability to perceive Muslim Americans as the collective Fifth Column everyone understands them to be.

No one, however, is more outraged at Schmitz’ suggestion that anti-Muslim prejudice might be at work in the Shariah-panic industry than Yerushalmi, who writes, “To even suggest, as Mr. Schmitz does, that those of us confronting the reality of transnationalism and Islamism are harboring some darker motives is, to put it mildly, patently offensive.”

National Review editor Rich Lowry didn’t respond to a request for comment. But when he fired Derbyshire, Lowry wrote that Derbyshire’s essay (which appeared in another publication) about teaching his children to, among other things, “[a]void concentrations of blacks not all known to you personally” was “nasty and indefensible.” Yerushalmi, to be sure, has a history of making statements that rise to the same category. So why, after two recent high profile episodes involving the race-tinged views of its contributors, is the National Review publishing someone whose incendiary record on race seemingly violates its standards?