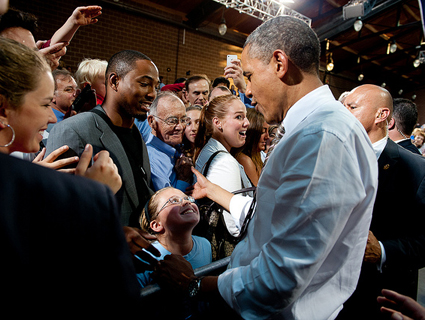 The Washington Post‘s Chris Cillizza says President Obama’s statement that “the private sector is doing fine” is going to be a big deal over the next six months. Why? Because political pundits are going to talk about how big of a deal it is:

First, while it is true that midday cable television viewership is low, that rationale completely disregards the media world in which we live, where even the smallest comment can be amplified into a national headline in minutes. Is there anyone paying even passing attention to politics who hasn’t seen the Obama clip five times at this point—which, by the way, is less than 96 hours after he said it? Answer: no.

Wait, really? We’ll have to wait for Pew’s next report on how little people pay attention to current affairs to see just how wrong that statement is, but the short of it is that it’s very wrong. I’m paid to pay attention to politics and I think I’ve seen the clip maybe once. The press conference in question was on a Friday afternoon. How are people supposed to have seen this clip if not on a cable news program? (No one watches cable news.) Cillizza notes that the Romney campaign has distributed a web video featuring the Obama quote, but that’s a lot different than a television ad capable of reaching people who don’t opt-in to watching it. And how do we know this will have any more of an impact than any of the dozens of other web videos released by the Romney campaign?

It’s very possible that this quote will enter Romney’s campaign lexicon going forward, but the idea that we should talk about it because we’ll be talking about it is pretty circular. The role of a political reporter isn’t to predict the future; it’s to cut through the balogna. In this case, Obama tripped on his line, but his factual point stands.