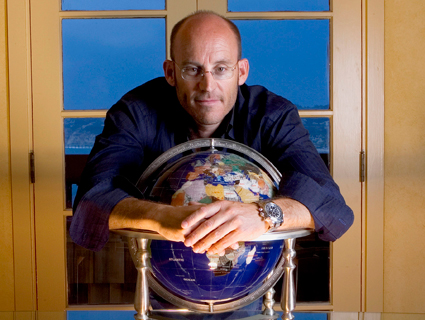 Politicians looking to raise a lot of money fast used to have a friend in Ted Waitt. Between 1996 and 2006, the La Jolla, California, billionaire gave nearly a half-million dollars to Democratic and Republican causes. When Democratic operative Harold Ickes needed cash to target President George W. Bush in 2004, Waitt cut a check for $5 million. But in recent years, Waitt, the once pony-tailed founder of Gateway computers, felt lost.

Now Waitt has decided to get back in the game. In May, he launched a super-PAC called icPurple, seeded it with $300,000, and set his sights on a handful of local and congressional races in California’s June 5 primary. His goal: Help independent, centrist candidates win political office. Think of it as the super-PAC for the David Brooks set. On Tuesday, Waitt will find out if it’s working.

The mission of icPurple rests on the theory that a large chunk of the American electorate is, at heart, a lot like Waitt. Its website asks readers to sign a “Declaration of Independents” and offers a test with questions that are designed to show we’re not as polarized as we might think. (Waitt classifies himself as socially liberal and fiscally conservative.) “If you can’t sign up for everything the Democrats believe in, you probably shouldn’t vote for a one,” icPurple warns. Ditto for Republicans. The super-PAC’s first television ad, a 30-second spot, features a band of elementary school kids fighting over whether to paint their tree house with red or blue paint. Finally, someone has the idea to mix the two. Voila: purple.

For Waitt, icPurple is only the latest in a long line of experiments.

For Waitt, icPurple is only the latest in a long line of experiments. He made his fortune at Gateway, the desktop-computing company he founded out of his parents’ garage in the 1980s. In 2005 he left the company, moved to La Jolla, and shifted his focus full time to Avalon Capital Group, a private equity firm he founded in the 1990s. Through his La Jolla-based nonprofit, the Waitt Foundation, Waitt has funded the study of the human genome, launched an unsuccessful search for Amelia Earhart’s plane, and supported researchers studying the Gospel of Judas.

This year, California is introducing a “jungle primary” system to determine who ends up on the ballot in November—a change that has presented Waitt with a unique opportunity for a political experiment. Unlike a conventional primary, in which Democrats and Republicans vote separately to determine their nominee, any candidate who gathers enough signatures can now appear on California’s primary ballot. The top two finishers in the primary, regardless of party, move on to compete in November. That gives independents an opening to do more than just play spoiler.

Take Linda Parks, a Ventura County supervisor and ex-Republican who’s running for an open seat in California’s 26th Congressional District. President Obama won the district with 55 percent of the vote in 2008, but there’s a chance the Democrats won’t even have a House candidate on the ballot in the fall. Republicans coalesced around a nominee, but the Democratic vote is split five ways. Parks appears poised to slip through the opening—thanks, in part, to a $50,000 investment from icPurple.

Waitt’s super-PAC is also airing ads in support of Chad Condit, an independent candidate who’s running in California’s 10th Congressional District. At the local level, the super-PAC is supporting San Diego mayoral candidate Nathan Fletcher, a former Republican state representative whose centrist virtues were recently espoused by none other than David Brooks in a March New York Times op-ed.

Fletcher helped inspire Waitt to start the super-PAC in the first place. During Waitt’s hiatus from political fundraising, he recalls being approached by GOP and Democratic operatives and candidates asking for to set up meetings. Fletcher was among them. Waitt turned them all down. “I was refusing to meet with him when he was a Republican, and when he left the party, I said ‘Oh, well I’ll give him a meeting,'” Waitt recalls. “And he was an impressive guy. I’d sorta say he was a catalyst.”

Waitt isn’t the only billionaire who has recently returned to political giving. Leo Linbeck III, a Texas real estate magnate with a thin record of donations, gave nearly a million dollars to launch the Campaign for Primary Accountability, dedicated to make life miserable for longtime incumbents. Louisiana oil billionaire William Doré, content to sit on the political sidelines for years, gave $1.5 million to a super-PAC supporting former Pennsylvania Sen. Rick Santorum’s presidential campaign. TD Ameritrade’s Joe Ricketts, who six years ago didn’t even donate to his son’s US Senate campaign, has signaled his intention to spend $10 million trying to take down Obama this summer and fall. Super-PACs are the hot new accessory for the über-rich.

But Waitt isn’t entirely sold on the concept of super-PACs. “I find a lot of it considerably distasteful and, frankly, [just] rich guys putting their money to work to try to get favors from an individual powerful politician or whatever it is,” he says. On the other hand, “They’re exercising their first amendment rights.”

To illustrate his dilemma, Waitt relays an only-in-the-1-percent anecdote. “I had [a chat with] the president of Kiribati, which is a small little country in the South Pacific that I’m in love with,” he says. “It’s all atolls, it’s in the middle of nowhere, within the next 100 years they’re gonna be underwater—and the president is this like Dalai Llama-esque very-wise man…and we had a discussion about [campaign finance].”

The conclusion? “Let’s face it, politics in this country is coin-operated,” Waitt says. “Does that really equate to a real democracy? It’s very difficult to say. Do I think I can change that system? No.” Given the situation, then, he figures he’ll make the best of it.

And then there’s the premise itself. Although Waitt says he lacks the presidential-scale ambitions of groups like Americans Elect and Unity ’08, two failed attempts to bypass the two-party system at the national level, icPurple has fallen for the same political myth. The super-PAC’s website touts survey results suggesting that 40 percent of Americans consider themselves either independent-minded or politically moderate.

But as Waitt concedes, most voters who call themselves “independent” are really partisans at heart. Only about 10 percent of those supposedly independent voters ever really change their vote, and the rest tend to hold the same kind of ideological views that are emblematic of the two parties. Case in point: One of the only two independents currently serving in the Senate is Bernie Sanders of Vermont—an unabashed socialist. (Sanders, Waitt says, is the not the kind of independent he’s looking for). The silent plurality trumpeted by icPurple might just be a mirage.