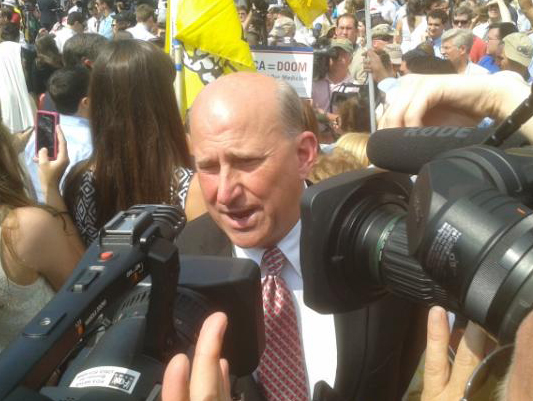 Outside the Supreme Court on Thursday morning, momentary confusion overtook the gigantic crowd of Obama supporters, tea partiers, congressional lawmakers, and hapless tourists. After it was erroneously reported that the court had rejected Obamacare’s individual mandate as unconstitutional, cheers went up from the side of the crowd where most of the tea partiers had gathered. But as news of the actual ruling trickled through the crowd, the tenor among the conservative activists quickly turned to anger, much of it directed at the high court.

“We are not going away,” shouted one activist into a microphone. “Liberty and freedom will survive…We’ll stay here until they get it right.”

Another took the mic a few minutes later. “You might as well come get me, ’cause I ain’t payin’ it,” she said. References to socialism, the Soviets, and communism abounded, along with chants of “Repeal it now.”

Soon, a different response to the decision had taken shape. In their majority opinion, the justices had concluded that the individual mandate in the health care law is constitutional because it constitutes a tax. Conservatives in the crowd (and on the airwaves) quickly seized on the ruling as proof that President Obama and other supporters of the law lied when they claimed the healthcare law wasn’t a tax in order to pass the legislation. “The Congress lied to the American people. The president of the United States lied to the American people,” said Rob Schenck of the National Clergy Council.

“Everyone who believes the president and those who work for him are fools,” said Rep. Louie Gohmert (R-Tex.), who spoke to the crowd outside the Supreme Court after the ruling. “If America doesn’t wake up and replace all of them who lied to us,” he continued, “shame on us.”

Cancer rhetoric was also popular, the irony of which seemed to be lost on those employing it. “Obamacare is a malignant tumor that feeds on America,” said Rep. Jeff Landry, (R-La.).

“Today America is threatened with a stage-three cancer of socialism, and Obamacare is the first symptom,” said Rep. Todd Akin (R-Mo.), who is running for the Senate this year against Democrat Claire McCaskill.

Tea party champion Rep. Michele Bachmann (R-Minn.) gave perhaps the longest speech, declaring that the law was “unconstitutional” and noting that “clearly this is an activist court.” (Nevermind that Chief Justice John Roberts, a conservative, voted with the liberal justices and authored the majority opinion.) “America will never be the same because of socialized medicine,” said Bachmann. “The government today is capable of forcing Americans to buy anything.”

Others took a slightly different tack. “They may say this law is constitutional,” said Rep. Phil Gingrey (R-Ga.), “but it’s un-American.”

Amidst all the unhappy tea partiers and congressional Republicans, I spotted a lone Democratic lawmaker—New York Rep. Jerrold Nadler. Nadler, who had previously fretted about how the “radical and unpredictable” justices might come down, was clearly pleased about the decision. I asked what he thought of the line of attack about the law constituting a tax that seemed to be developing. “So it’s a tax. So what?” he said. “I thought the administration should have said that right out.”