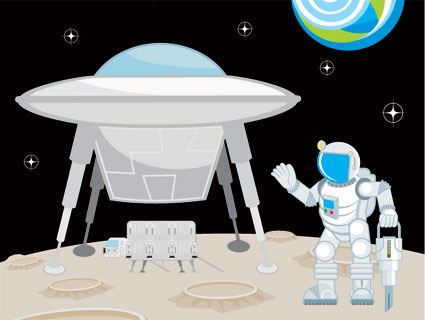 What sounds like a plot element from a science fiction movie could soon become a very real concern for the United States and other countries—mining in outer space. Two US companies recently announced plans to explore mining opportunities on the moon and close-in asteroids. But the environmental, legal, and public safety effects of private companies’ plans to exploit space resources could be significant—and remain largely unexplored.

Moon Express, a California-based start-up, is competing for Google’s Lunar X Prize, which offers a $30 million bounty to the first private company to successfully send a robot to the moon to explore, gather data, and send it back to Earth. (NASA has agreed to purchase the firm’s lunar data if its mission succeeds.) Moon Express hopes “to commercialize the moon,” says Brad Kohlenberg, a public-outreach liaison for the company, which plans to eventually offer lunar delivery services (for which there is apparently a demand) and mine for platinum and water. The first mission, specifically for research purposes, is planned for late 2014.

Planetary Resources, a Bellevue, Washington, company that aims to mine asteroids, was launched with backing from Google’s Larry Page. (Director James Cameron is an adviser.) Mining resources from the over 1,500 asteroids that are as easy or easier to reach than the moon will benefit the planet, promises Stacey Tearne, a consultant for Planetary Resources.*

“These ‘space rocks’ contain a range of minerals, from water to platinum,” Tearne says. “Asteroid mining will provide sustainable resources on Earth and will afford the availability to maintain a human presence in space.”

Neither Planetary Resource’s Tearne nor Moon Express’s Kohlenberg foresees legal issues with their plans. Kohlenberg argues that ocean mining, in which companies mine in international waters without claiming ownership of them, sets a precedent for moon mining. “You can mine from the moon and have ownership of [those resources] without having to claim that you have ownership of the moon,” he says.

But Frans von der Dunk, a professor at the University of Nebraska whose actual title is “the Harvey & Susan Perlman Alumni and Othmer Professor of Space Law,” says Kohlenberg’s ocean mining parallel isn’t accurate. There are already internationally agreed-upon rules for ocean exploration, but there are no such rules for space mining.

That leaves a lot of uncertainty about the legality of corporate exploitation of outer-space resources—uncertainty that needs to be remedied, von der Dunk argues.

The risk of accidents or malfunctions in space mining is much higher than in ocean mining, von der Dunk notes. An asteroid might even change course because of mining efforts and threaten Earth, he warned. “This has led me and others to repeatedly call for development of a proper regime at the international level to handle such operations, to properly balance the global public interests in terms of safety, security, ecological security, and the preservation of historic sites,” von der Dunk says.

As Paul Marks from New Scientist has noted, two existing legal frameworks, the Outer Space Treaty and the Moon Agreement, don’t necessarily govern the proposed mining projects. The Outer Space Treaty states that “neither the surface nor the subsurface of the Moon (or other celestial bodies in the solar system), nor any part thereof or natural resources in place, shall become property of any State, international intergovernmental or non-governmental organization, national organization or non- governmental entity or of any natural person.” The Moon Agreement, a treaty designed to reaffirm and elaborate on provisions of the Outer Space Treaty as applied to the moon and other celestial bodies, has not been ratified by the US or other space-exploring nations.

The Outer Space Treaty, which has been ratified by over 100 states, including the United States, “cannot be ignored,” von der Dunk says. Under the treaty, all states are fully responsible for national activities in space, including those by private operators. The US government is theoretically liable for any violation of the treaty by these companies. But the mechanism for actually punishing such a violation is still uncertain.

In the meantime, Moon Express and Planetary Resources are pushing ahead with their plans—legal clarity or not. Ultimately, the United States and the international community will have to work out a more thorough agreement for dealing with space-based resources. “Simply sharing the exploited minerals or the technology used is, of course, not going to work,” von der Dunk says.

*An earlier version of this article incorrectly stated that James Cameron is an investor in Planetary Resources. He is an adviser. Also, although Planetary Resources estimates that there are over 1,500 asteroids that require the same or less energy to reach than the moon, those asteroids are not necessarily between the earth and the moon or closer to the earth than the moon. The text has been corrected.