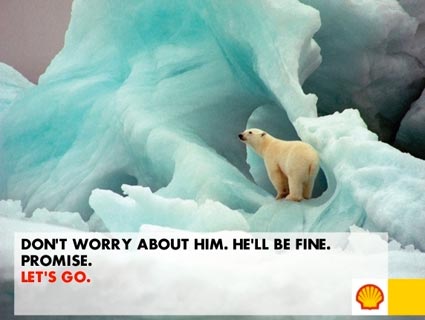 Any of you catch the #ShellFAIL party video last week? The one where the oil company allegedly threw a rager atop the Seattle Space Needle to celebrate its new Arctic drilling ventures, only to have a model rig that served drinks malfunction and shoot crude-colored liquid all over a terrified elderly woman? What about that related website, arcticready.com, and its corporate campaign to take advantage of global warming? Play any “Angry Bergs”?

Meet Logan Price, 28, the protester and carpenter who was in on the prank—and who originally posted the video, pretending he’d obtained it by sneaking into a private event. You might be familiar with his work: Price also questioned President Obama on alleged WikiLeaks-source Bradley Manning in a video that made the internet rounds in April of 2011. According to Price, the Shell stunt was developed to protest the drilling plans from a distance after a federal judge in Anchorage granted the company a restraining order blocking Greenpeace from interfering with its operations.

Price spoke with Mother Jones about planning the hoax, training the volunteers, figuring out how to milk the stunt for maximum publicity.

MJ: Can you describe the work that went into planning?

LP: We had to get somebody to make the ice sculpture, and we had to get someone to make the drill rig model. The part that I was most involved in was recruiting folks to be at the event, sort of as extras, posing as individuals from various energy backgrounds. We had about 30 people there that were our own folks. They had to find, basically, identities that they would research and make up to be. Our original intent was to get as many people as possible from the industry there, actual real people. There were fake websites set up, a lot of phone calls, and a lot of invitations sent out to try and get them. And we put a lot of extra care into making sure that our volunteers wouldn’t blow their cover when hanging out and conversing with those folks over cocktails for a couple of hours.

MJ: Were most of the volunteers activists, or were they actors?

LP: They weren’t actors, they were just regular people, really. There were people that were politically concerned, and willing to come and do something about it. Not many of them were what you would call activists in the sense that that’s what they devote their lives to. Most of them had careers: They were real estate agents, or carpenters, or utility workers, or musicians. All sorts of folks were there.

MJ: Had you ever done anything like this before?

LP: Not quite like this. I coordinated a flash mob at a Target in Seattle once, that went pretty viral. It had a couple of million views. That was around Citizens United stuff. I’ve done a pretty wide variety of creative actions. But I’ve never done something that was as much of a sneak attack as this one, for sure. And it was sort of difficult to make that call personally, being the one who was going to be leaking this video as if it was real. You know, I had to think pretty carefully about that, because my name was going to be the first one on the whole story, and the one that everyone was going to be looking in to if this is real or not, before the whole reveal happened. That was a tough call.

MJ: What kinds of things were you considering, were you thinking about?

LP: Well, my own credibility, for one. And I took some flack for it. But also just kind of the idea of, like, you know, what does it mean to push a false story, basically. And I ended up thinking, “Well, this is so goofy, who’s going to take it seriously?” [laughs] Way more people bought it than I actually thought would. Which is why it was successful, but…

MJ: So what about the second part? You brainstormed, you set it up, you enlisted volunteers…how did you make it go viral?

LP: We wanted our first wave of media to be that “this is a real thing.” But at the same time we wanted the video itself to look like something we all wish would happen, right? These people are pillaging the Arctic and are basically putting a large part of the planet at risk, doing the most absurd thing ever, which is to take advantage of global warming itself to go tap some more oil in the most dangerous conditions possible. And there’s a good chance that’s how their actual Arctic program will go. It could be a complete fiasco. It could be a massive spill.

So we wanted to show that as much as possible. Our first round, basically, was to use this model of a leaked insider video, and we’ve seen a lot of these lately, especially with Occupy. We tried to as much as possible to line up beforehand the social media outlets that we wanted to have help us push it, and a few of them agreed. In the early morning hours when the video was finally published, we tried to basically, pump it up, if you excuse the metaphor, with as many of our allies as possible, to throw it out there and create a thing out of it and show as many people as possible to see it.

MJ: So there were social media outlets who were in on the joke?

LP: Yeah. Occupy Wall Street social media, a large part of it was in on the joke. Occupy Seattle, and a few other blogs which I won’t name.

MJ: When was the moment when you knew that you and everyone else at the Yes Lab and Greenpeace had pulled it off?

LP: We were basically watching the hashtag roll in that morning, and we watched it explode, and thenwatched little articles pop up. And as it really caught on, we were waiting in anticipation for this moment when somebody who had enough of a following would be like, “You know, this is fake.” And that somebody ended up being Adrian Chen from Gawker. And we all love Adrian, but he basically did enough of a background search on the whole project to find out it was false. He looked at the registration information on the URL for the company that we had invented that was hosting the party, WainwrightShore.com, and they happened to be on the same server that the Yes Men used.

That wasn’t the end of our media strategy though, and so we were waiting for that to happen. We had a fake press release from Shell, which said “This video is false, and we’re going to pursue these people to the ends of the earth, blah blah blah. We’re going to take legal action against whoever’s smeared our identity.” And that was sort of a second news story that we were counting on. What we didn’t expect was that it would be so successful on social media. So Shell actually issued an official response saying this video’s false, before we managed to get our release out. A couple people picked up on theirs. But once ours went out, which looked like it was from Shell, then a bunch of people actually published that as the truth, as the real story, saying “This is false, according to Gawker, and plus, Shell says they’re going to go after these folks.” That even included UPI—100 years of journalistic excellence, or whatever.

The third round was the launch of our arcticready website, which some folks put a lot of effort into, which was a sort of tongue-in-cheek version of Shell’s website, all about how they’re going into the Arctic. And included a little ad-generator for people to make their own ads, and a really goofy flash-based kids game called “Angry Bergs,” that’s pretty fun to play.

And then the final round of our press strategy was a full reveal: This was a collaboration with the Yes Men and Occupy and Greenpeace, and this was what we did. So, we tried to diversify it as much as possible. We’d have a good pick up on social media at first, and then we’d have a follow up on the blogs from Shell, then we’d have a full reveal for some of the more mainstream press that would be more careful from the onset on what they were going to publish.

MJ: Given your earlier concerns about your credibility—you once wrote an op-ed for the Guardian and have been interviewed by other major news sources in the past—was it worth it, and how so?

LP: For me, it was totally worth it. And I’d do it a million times over. It was a little bit scary in that regard, but not any more so than, you know, going to jail, and facing actions from the state, and rejection from family, that a lot of folks have taken this year with Occupy. I’ve seen people here in New York go to jail nine or ten times just for marching, and being completely fearless about it. So for me, to like, worry about my credibility on Twitter seemed pretty ridiculous when I really thought about it. This was an issue that I care strongly about. I’ve never seen anything as heartbreaking as the BP oil spill in Louisiana. I couldn’t even imagine anything worse than that, and even being down there just for a couple of weeks and watching oil wash up on the shore constantly, dying sealife, and that whole ecosystem in major peril, and to think about that in the Arctic just breaks my heart. I would never be able to live with myself if I didn’t do anything about it, when something happened up there.