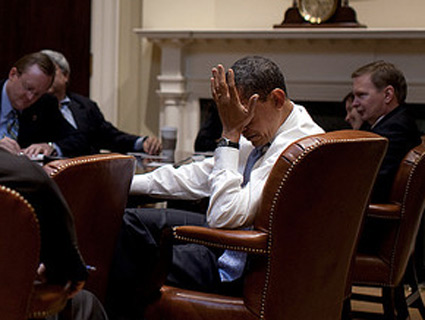 Not a good morning for Team Obama. The monthly jobs report was weaker than expected. Only 69,000 jobs were created—less than half of the 150,000 expected, and unemployment ticked up to 8.2 percent. This comes at a rather inopportune time for the president (as well as the entire country). He and his advisers are desperately trying to use the pre-summer weeks—before voters slip into their vacations-and-Olympics lull—to define Mitt Romney as a vulture capitalist who was a dud of a governor in Massachusetts. Their goal is to create a deep negative impression of the presumptive GOP nominee as soon as possible so they won’t have to start the process again in September. Meanwhile, Romney’s aim is somewhat easier: to superglue the president to the lousy economy. And, on that score, the jobs report helps greatly.

To see why Obama is indeed in trouble, one need only look at what had once been one of the White House’s favorite charts: 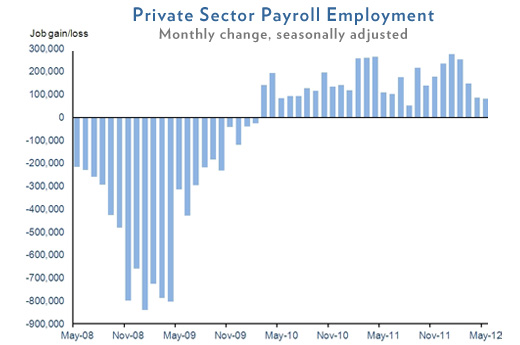 Courtesy of the White HouseFor two years, administration officials have been waving this graphic. It clearly shows the hole that Obama inherited and demonstrates that a turnaround did begin soon after he entered office. But take a gander at the three most recent bars. They indicate a steep drop in this turnaround and a disturbing trend.

Certainly, there can be a debate as to what is stifling jobs creation. Gridlock in Congress caused by GOP obstructionism could be blamed. No doubt, Obama’s jobs bill, if passed, would lead to new jobs. But Romney has the easy argument at the moment: it’s not working. He doesn’t have to define the it.

For many voters, it’s the president who needs to do the explaining. The White House did release a statement this morning:

Just like last year at this time, our economy is facing serious headwinds, including the crisis in Europe and a spike in gas prices that hit American families’ finances over the past months. It is critical that we continue the President’s economic policies that are helping us dig our way out of the deep hole that was caused by the severe recession. In the American Jobs Act and in the State of the Union Address, the President put forward a number of proposals to create jobs and strengthen the economy, including proposals that would put teachers back in the classroom and cops on the beat, and put our nation’s construction workers back on the job rebuilding our nation’s infrastructure.

And the White House statement added: “As the Administration stresses every month, the monthly employment and unemployment figures can be volatile, and employment estimates can be subject to substantial revision. Therefore, it is important not to read too much into any one monthly report.” But that’s sort of like telling someone: “Don’t think about an elephant.” Whoops. You just did.

For Obama to have a chance of reelection, the bars to come on this chart will have to get bigger. At the moment, the White House’s Exhibit A is becoming evidence for the other side.