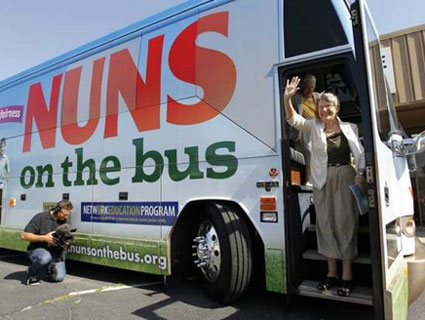 Photo courtesy of Nuns on the Bus

Back in April, Congressman Paul Ryan trotted out his Catholicism to justify a budget plan that carves deeply into social welfare programs. Then the Vatican slammed nuns for spending too much time fighting poverty (instead of hating on gays). Rather than cave to the Pope’s agenda, a bunch of Sisters in the US decided to affirm their commitment to the poor through a two-week-long, nine state bus tour meant to highlight how federal budget cuts hurt those on the margins.

The campaign kicked off in Ames, Iowa with a “rotating cast” of 14 nuns from all over the country, and will conclude in Washington, DC on July 2. The group’s big blue rig, emblazoned with “Nuns on the Bus,” is making stops at the district offices of Ryan and other GOP lawmakers to speak out against Ryan’s Ayn Randian budget proposal, which would slash food stamps, Medicare, and other social programs, while cutting taxes for the rich. They’ll also be visiting Catholic social service agencies to speak with the poor.

Mother Jones caught up with the sassy, exuberant Sister Simone Campbell, executive director of NETWORK, the Washington, DC-based Catholic social justice lobby that is sponsoring the trip, as the bus headed to Chicago. Campbell talks about the nuns’ rock star reception in Iowa and Wisconsin, “friend-raising,” the “pull-up-the-drawbridge” mentality, and the secret American hunger for solidarity.

Mother Jones: What do you say to the Bishops’ accusations that you focus too much on poverty?

Sister Simone Campbell: Isn’t that funny? Well, we agree with the bishops that the Ryan budget is “immoral.” We think it’s not in keeping with faith or our American values. Yeah, there are different perspectives, but the mission of Women Religious has always been about being at the margins. We’ve always been a mild annoyance to the people at the center, but that’s part of the gift of spirit. We nudge them and they nudge us. So yeah, we can learn from the Bishops, but they’re also called to conversion.

“At one point they burst into applause and I turned around and gave them my serious nun-like scowl.”

MJ: What would a Ryan budget mean for the poor and those who serve them?

SC: The painful reality in this tough economy is that so many people have slipped into poverty. Bread to the World [an anti-hunger group] figured out that if the House budget goes through with all of the food stamp cuts that are proposed, and they say, “Oh, churches can do this work,” then each house of worship in the US would have to raise an additional $50,000 a year for 10 years to make up for the loss of food programs. That’s just impossible. We’re great at distribution, but we don’t have that kind of money.

MJ: You’re proposing a “Faithful Budget.” Can you talk about that?

SC: The Christian, Jewish, and Muslim communities in DC came together and created a budget with our spending priorities. We need to have reasonable revenue for responsible programs. That means taxes. After 9/11, we declared two wars and for the first time in history, we cut taxes instead of paying for the wars. Now we’re in trouble and people want to blame social programs for it. The problem isn’t social programs, it’s that we failed as a nation to pay for our priorities. Now we have to pay. 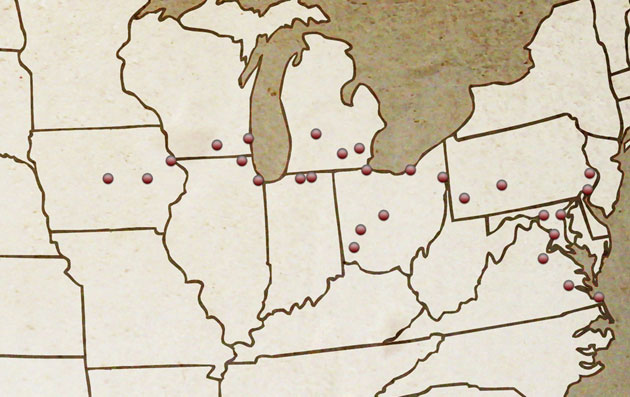 Nuns on the Bus Itinerary

MJ: You’ve said this tour is also about a broader trend toward individualism that you see in American politics and society.

SC: Absolutely. I was doing a workshop recently and as I was handing out Catholic social teachings, a woman said, “that sounds like socialism!” And it’s like, well, it only sounds that way because it’s trying to call to conversion from the shadow side of our culture. Our culture is amazing at individualism. But the part that Paul Ryan and the House leadership have really missed is that there’s a whole other side to this. Individual responsibility only works when we’re significantly engaged in community. We call this solidarity. What I’ve realized is that all the people losing their jobs, losing their houses, has created a profound fear. People get a pull-up-the-drawbridge mentality: “Let me take care of my own family, I can’t worry about anybody else.” It’s that fear of falling that I think is eroding our nation.

MJ: How has the response to the campaign been so far?

SC: Glory! Apparently a bunch of people are saying we’re rock stars. This is like nothing I’ve ever seen before. Hundreds of people have come out, and they’re all shouting “thank you” to us! But we want to thank them. It’s truly awesome.

MJ: What have your experiences been at the congressmen’s offices you’re visiting?

SC: It seems like as we’re getting more notoriety from the press, they’re more inclined to be interested and not just push back. Wednesday, at Congressman Joe Walsh’s office, his staffer let us bring in a couple hundred people. But I felt like I had my posse with me, so I had to tell them: No cheering, no booing, just listen up ’cause we’re gonna really try to have a conversation. At one point they burst into applause and I turned around and gave them my serious nun-like scowl. But we were able to have a conversation.

MJ: Tell me your favorite story from your trip so far.

SC: My glory, it’s only day four and we’ve got tons of stories! I think the one that touched me the most was at the dining room at St. Benedict’s in Milwaukee. I sat next to this really nice man Billy and his two kids and his wife. He is only working part-time because of cut-backs, and because they know they only have enough money for either a roof or food, they’ve decided that rather than living in their car, they’ll come in every night to St. Ben’s for dinner. I was so touched by this family struggling to care for their kids. It’s sacred.

MJ: Your itinerary includes several “friend raisers.” What are those?

SC: We didn’t want to call it a fundraiser because we want everyone to feel free to come. Also, soon we’ll be gone and the people will be left, so we’re trying to find a way of bringing people together to make connections. To know that there is community. There’s something about this trip that is touching a deep hunger in our nation and it’s way beyond me. I can’t define it. I’m just awed to be a piece of it.