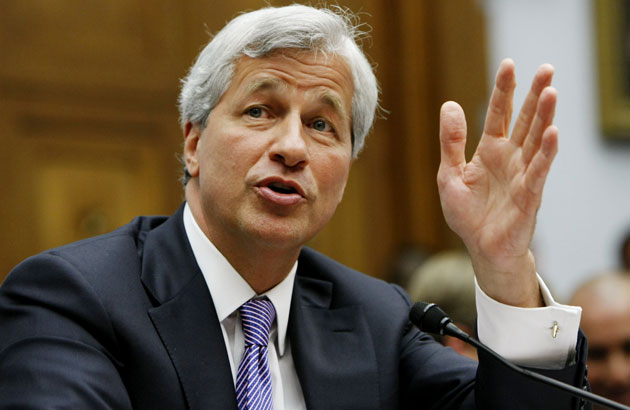 His Senate hearing was hardly a grilling; senators mostly praised him for his “emphasis on continuous quality improvement,” in the words of Senator Jim DeMint, R-S.C.

As we charted last week, JPMorgan happens to have plenty of connections to the Senate committee. The House committee where Dimon is appearing today has its own ties to the bank. Congressmen and staff from the committee have gone to JPMorgan and its lobbying firms. Members have also gotten hefty campaign contributions from the bank’s PACs and employees.

JPMorgan has two in-house lobbyists with connections to the House Financial Services committee.

There are also three former congressional staffers with committee ties at firms currently lobbying for JPMorgan:

Data compiled by the Center for Responsive Politics also shows how representatives on the committee have benefited from the generosity of JPMorgan’s employees and PACs.

In the 2012 election cycle, JPMorgan’s PACs and employees have so far given $168,000 to members of the committee. About 80 percent of that came from one of the bank’s PACs.

Despite the hearings, neither the House nor Senate is actually conducting investigatons of JPMorgan’s losses. But the Department of Justice is, along with five of JPMorgan’s regulators — the FDIC, SEC, CFTC, OCC and the Fed. Lest you find that load of government acronyms as bewildering as Dimon said he did, we’ve also laid out their various investigations, and in a few cases, their own JP Morgan connections.

The Securities and Exchange Commission is looking into how JPMorgan disclosed risks to shareholders. SEC chairman Mary Schapiro outlined in testimony to the House today the various kinds of disclosure the SEC can target, without going into details on JPMorgan.

JPMorgan has two former SEC enforcement heads working for them now: the company’s general counsel is Steven Cutler, who headed enforcement at the SEC from 2001 to 2005. They have also reportedly retained William McLucas from an outside law firm, another SEC enforcement director who spent two decades at the agency.

The Commodity Futures Trading Commission is flexing new muscles gained from the Dodd-Frank financial reform. According to the Wall Street Journal, they are subpoenaing internal bank emails to determine if JPMorgan officials made deceptive statements — something that could constitute fraud or manipulation of derivatives market. The CFTC has never brought charges under the new rules, which went into effect last year.

The Office of the Comptroller of the Currency director’s testimony for today echoes what he told the Senate earlier this month. The agency is looking at JPMorgan’s risk-management strategy leading up to the losses, and reviewing the OCC’s own oversight of the bank.

As ProPublica’s Jesse Eisinger wrote recently, this is also something of a test for the OCC under its new commissioner Thomas Curry. The agency has had a reputation for favoring light regulation — including a watered-down version of the Volcker Rule, a Dodd-Frank ban on proprietary trading that some say would stop trades like the one that led to JP Morgan’s loss when it goes into effect. Curry cautioned in his testimony for today that the OCC hadn’t determined whether JP Morgan’s trade would have been banned under Volcker.

In his testimony, the legal counsel of the Federal Reserve said that the agency was still looking, but had not yet turned up any evidence of weak risk controls at JPMorgan.

Jamie Dimon sits on the board of the New York Federal Reserve — something that’s prompted a proposed bill from Democratic senators that would ban officials of banks that can receive loans from the Fed from serving on any of its boards. JPMorgan and 17 other banks whose execs served on regional Fed boards got emergency loans from the Fed between 2007 and 2009. A government report found no evidence of conflict of interest from the arrangement, but did raise the concern of “reputational risks” from the appearance of one.

The Federal Deposit Insurance Commission chair testified that the FDIC has added extra staff and has “met daily” with JPMorgan employees to take a broader look at the company’s risk management beyond the unit that made the losing trades, according to their prepared testimony.

A recent appointee to the board of the FDIC, Jeremiah Norton, is a former executive at JPMorgan Securities. Before that, he was an aide to Ed Royce, R-Calif., who sits on the House finance committee.

The DOJ isn’t testifying this morning, but they have started an inquiry into what executives at JPMorgan knew when they initially dismissed the losses. It’s not clear what kind of charges could come from that investigation.