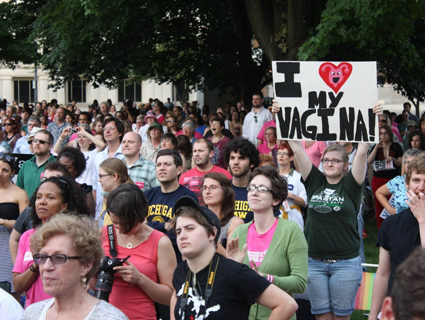 On Monday night, more than 2,500 people joined eleven state legislators and playwright Eve Ensler for a special performance of Ensler’s The Vagina Monologues on the steps of the Michigan state capitol. It was a fitting culmination to “Vaginagate“—the scandal that’s brought national attention to an anti-abortion bill passed by the Michigan House last week.

Here’s the backstory: Last Wednesday, during debate on a slew of anti-abortion provisions, Democratic state Rep. Lisa Brown was reprimanded by the Republican Majority Floor Leader for violating the decorum of the House and banned from speaking the next day. Her offense? After saying that the legislation would go against her Jewish religious beliefs and that abortions should be allowed when required to save the life of the mother, Brown ended with, “Finally, Mr. Speaker, I’m flattered that you’re all so interested in my vagina, but ‘no’ means ‘no.'”

Another Democrat, Rep. Barb Byrum, was also silenced when she proposed an amendment that would apply the same regulations required by the bill to vasectomies as well—which, as MoJo has reported, is a popular new tactic by cheeky state lawmakers who support abortion rights.

House GOP spokesman Ari Adler eventually claimed that the kerfuffle “has nothing to do with the word vagina.” Instead, Brown was deemed out of order for implicitly comparing the legislation to rape by saying “no means no.”

But by that point, there was no walking back the social-media friendly scandal. Abortion-rights supporters were all too happy to capitalize on the symbolism of banning a woman lawmaker for talking about female anatomy while speaking against a bill related to reproductive health. (“Can’t say it? Don’t legislate it,” advised the ACLU of Michigan.) And nothing invites ridicule like male lawmakers who seem squeamish about discussing lady parts. (Just ask Virginia state Rep. Dave Albo.) Plus, the word “vagina” makes for some popular Twitter hashtags.

And you’ve gotta love the signs. Here’s a short video, courtesy of the Michigan House Democrats, featuring some of the best ones from Monday night’s event—which was, rather aptly, dubbed political theater by the bill’s supporters.