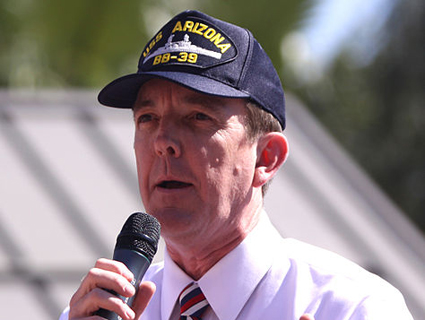 Arizona secretary of state Ken Bennett stepped in it back in May when he threatened to keep President Barack Obama off the November ballot unless the state of Hawaii produced a copy of his birth certificate. This was an odd demand, because Obama and the state of Hawaii have already produced two copies of Obama’s birth certificate. Bennett eventually backed down and apologized to the citizens of Arizona (but not before Democrats demanded that he investigate rumors that Mitt Romney is secretly a unicorn).

Now, Bennett is at it again. Speaking to local Republicans last week, Bennett alleged that the president may have told college admissions officers that he had been born in Kenya in order to receive special perks. Per the Arizona Republic:

“Now, I know there are a lot of people who are very skeptical about whether the president was born in Hawaii,” he said. “Personally, I believe he was.

“I actually think he was fibbing about being born in Kenya when he was trying to get into college and doing things like writing a book and on and on and on.

“So, if there was weird stuff going on, I actually think it was happening back in his college days because I think he has spent $1.5 (million) or $2 million through attorneys to have all the college records and all that stuff sealed.

“So, if you’re spending money to seal something, that’s probably where the hanky panky was going on.”

Bennett on Wednesday said that his comments are being misconstrued and that he was hinging his statement on the word “if.”

It just depends on what your definition of if is!