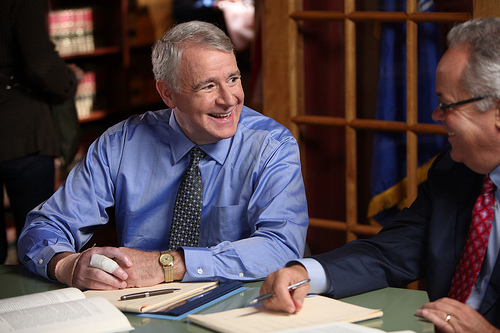 Gov. Scott Walker and his conservative allies have spent nearly $17 million to boost his candidacy in Wisconsin’s looming recall election. What have they got to show for it?

Nothing, according to a new Marquette University Law School poll.

Despite all the TV ads attacking Democrat Tom Barrett and touting Walker’s supposedly job-centric agenda in Wisconsin, all the mailers, websites, and other campaign messaging, Walker trails Barrett by a single percentage point, 47-46, in the new Marquette poll. (The margin of error for the recall election is ±4 percentage points.) What’s more, as the Washington Post‘s Greg Sargent notes, the Marquette poll shows that Walker’s approval rating remains frozen at around 50 percent. All that spending and the people of Wisconsin are just as divided as ever on the performance of their governor.

There’s more good news in the poll for Barrett, the mayor of Milwaukee who lost to Walker in Wisconsin’s 2010 gubernatorial election. He leads former Dane County executive Kathleen Falk, the other top Democrat in the May 8 recall primary, by a healthy 17 point margin, 38-21. Barrett, it seems, has all but sewn up Democratic nomination, even after labor unions dropped millions to boost Falk.

Should Falk somehow pull off a last-ditch, she’d face an uphill battle against Walker. In the Marquette poll, she trails the governor 49 percent to 43 percent.