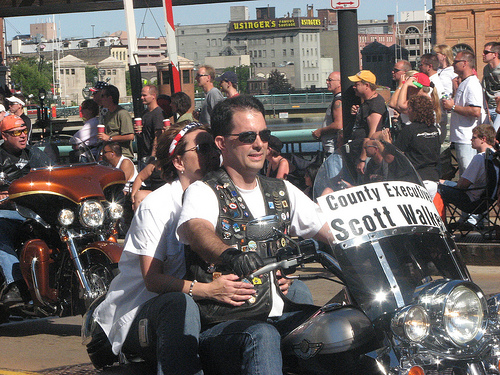 For those needing more confirmation of Wisconsin Gov. Scott Walker’s rock-star status in the Republican Party, look no further than his latest fundraising haul: $13.2 million.

That’s how much Walker raised from January to late April of this year to protect himself in his June 5 statewide recall election. His haul is 670 percent more than that of his four Democratic rivals combined. Milwaukee Mayor Tom Barrett, the leading Democrat vying to oust Walker, raised $831,500, while former Dane County executive Kathleen Falk pulled in $977,000.

Walker has jetted around the country in recent months to amass a war chest to fend off his Democratic challenger in June. As the Associated Press reported, Walker attended the Christmas party for anti-tax zealot Grover Norquist, fundraised alongside former AIG CEO Hank Greenberg in Manhattan, and this month asked for money at an Oklahoma fundraiser co-sponsored by Koch Industries. Not surprisingly, out-of-state donors accounted for $8.8 million—or two-thirds—of Walker’s 2012 haul. They include some of the GOP’s biggest bankrollers, including casino tycoon Sheldon Adelson and Texas homebuilding giant Bob Perry.

Walker has raised $25 million for his recall campaign since January 2011. He benefited from a quirk in state election law that let him raise unlimited recall defense funds for months while his opponents gathered the necessary signatures to trigger a recall election. Democrats, however, did not get to raise unlimited funds because they were not targeted for recall.

Walker’s fundraising is on par with that of second-tier presidential candidates. For instance, Rick Santorum raised $18.5 million between Jan. 1 and March 31, and Newt Gingrich raised a little less than $10 million during that period.

Her donation was the single largest ever to a gubernatorial candidate in the state and tied the $500,000 given to Walker over recent months by Bob Perry, owner of Houston-based Perry Homes and a chief backer of the Swift Boat Veterans ads against Democrat John Kerry in the 2004 race for president.

“Wisconsin’s never seen anything like this kind of money,” said Jay Heck, executive director of Common Cause in Wisconsin. “This is all to persuade a relatively tiny universe of undecided voters. It’ll be the highest cost per voter spent in the history of the nation in terms of the cost of persuading people.”