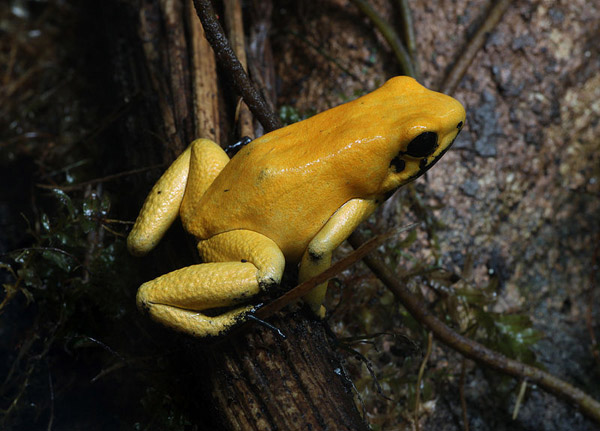 I get a lot of press releases about cute, cuddly, endangered critters. They’re not often about ugly or slimy species. But yesterday, I got one from several conservation groups touting efforts in Colombia to protect one of world’s deadliest animals: the golden poison frog.

The tiny frog weighs less than one ounce, but is possibly the most dangerous animal in the world. How dangerous? Well, as the press release explains:

Its poison is so toxic that even coming in contact with a paper towel that has touched the frog has been fatal to animals. Although they are only two inches long, it is estimated that each golden poison frog has enough toxin to kill ten adult people within minutes.

[…] This frog is named because of its bright orange skin that is covered by a secretion of deadly alkaloid poison (batrachotoxins). The toxin prevents nerves from transmitting impulses, leaving muscles in a constant state of contraction – leading to heart failure. Death comes within minutes.

Yeah, not exactly the kind of animal you want to go out and hug. The frog has just one natural predator, a snake that evolved to withstand its poison. The biggest threat to the frog is the loss of habitat, which has been destroyed by both illegal gold mining and logging in Colombia.

But now the Colombian conservation group Fundación ProAves has partnered with the World Land Trust, American Bird Conservancy, and Global Wildlife Conservation to buy 124 acres in the Chocó forest along the country’s western coast to create the Rana Terribilis Amphibian Reserve. It is the first designated conservation area for the frogs, which are considered endangered internationally.

It strikes me that the golden poison frog represents a real test of our willingness to save endangered species. It’s not cute, in my humble opinion. It’s not endearing. It could kill you—and nine of your friends.