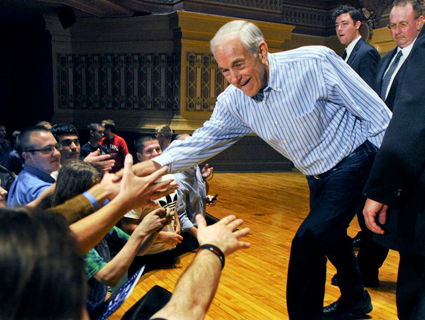 What do they want? A gold-based monetary policy and a restoration of civil liberties! When do they want it? As soon as possible without jeopardizing the gains they’ve made within the Republican party structure in the last four years!

For supporters of Rep. Ron Paul, 2012 is different. Four years ago, the Texas Republican was shut out of the Republican National Convention in St. Paul, denied a speaking spot despite placing fourth in the delegate race. His feisty supporters responded by staging a counter-convention, the Rally for the Republic, that drew 12,000 rabid Paulites to Minneapolis on the eve of Sen. John McCain’s acceptance speech—a speech that was briefly interrupted by a heckling Paul supporter. Now, with a hundred delegates to Paul’s name and a string of victories at state conventions, Paul’s energized supporters are planning to unleash mayhem in Tampa, right?

Er, maybe not. After being treated like the black sheep of the GOP four years ago, Paul’s most passionate supporters have been granted a seat at the grownup table in Florida and they’re out to prove they belong. Instead of crashing the party, this time they’re planning on throwing one.

Tentatively scheduled to be held at Tampa’s Florida Fairgrounds the weekend before the Republican convention, Paul Festival is slated to feature musical acts, libertarian and paleo-conservatives celebrity speakers like Barry Goldwater III (Alex Jones has been extended an invitation but is not confirmed), and a gigantic birthday cake for Paul (he turns 77 in August), who they’re hoping will make an appearance. Organizers recommend hitching a ride to the event in a “Ronvoy” to save costs.

Zak Carter, a media liaison for Paul Festival who was discharged from the Army after endorsing the congressman while in uniform, says he’s “hoping for half a million” attendees, which could be a bit overly optimistic given that his low-end range is 40,000. “We would like to have kind of a Woodstock experience,” he says.

A massive open-air party would be a fitting conclusion to a primary campaign that saw the Texas congressman improve significantly on his performance four years ago, besting well-heeled establishment candidates in Iowa and New Hamsphire and quietly racking up delegates. In 2008, it was a protest-convention; in 2012, it’s a pregame show.

That’s not to say Paulites will completely pipe down when the show starts. Paul’s revolution has always been a nebulous affair, organized loosely around support for the Texas congressman but often operating independently of any central structure. (Even the movement’s iconic logo, the “Revolution” sign with the word “Love” written backwards, was initially rejected by the campaign as the work of a rogue supporter.)

“The joke now is that the Ron Paul people are the establishment,” says Craig Westover, a Paul delegate from Minnesota

Carter, along with another well-known Paul-supporting veteran, Adam Kokesh, plan on organizing a demonstration on the first day of the convention in Tampa with their organization, Veterans for Ron Paul. “We’re not there to protest; we’re there to remind people that Ron Paul has a heck of a lot of support from the military,” he says. “We’ll be outside showing our support for Dr. Paul, but I don’t think anyone from my group plan on causing a disruption within the RNC.” Kokesh, who was booted from the convention floor in 2008 after heckling Sen. John McCain, adds in an email: “I have heard no specific plans for disruptions.”

One reason for the gentler approach is that at this year’s convention Paul supporters will not be stuck on the outside looking in. Although the congressman scaled back his campaign in May, he continued aggressively pursuing delegates in states with unconventional nominating methods. It worked. He won a majority of delegates in Nevada and effectively took over the state party in the process. Ditto in Maine. In Minnesota, Rick Santorum’s much-hyped February caucus victory was mostly window-dressing; Paul ended up winning 12 of 13 delegates at the state GOP convention thanks to a superior organization. Paul had been barred from speaking at the state convention four years earlier, but this year brought down the house with a speech from the floor.

“The joke now is that the Ron Paul people are the establishment,” says Craig Westover, a Paul delegate from Minnesota. A longtime libertarian activist—he joined the Libertarian Party in the 1970s—Westover views Minnesota as a model for how Paul supporters can co-opt the Republican party. Paul supporters are now in the unfamiliar position of having something to lose, which is why they’re placing a premium on good behavior. “At least in Minnesota we’re actively working to make sure that nothing like that happens,” in Tampa he says, when asked about potential provocateurs. “Smart money says that somebody’s gonna yell something embarrassing at some point in the convention, but it’s being discouraged.”

“We would like to have kind of a Woodstock experience,” Carter says.

At this stage, the stakes are just too high. “It’s just like the gay rights movement, the women’s rights movement—those movements start out and the initial people who get them started are people with nothing to lose, and the people who are kind of on the fringe,” he says. There’s a maturation process, in other words; as it gains broader acceptance, the movement will churn out candidates with greater mainstream appeal—and the GOP itself, will start to look a little bit more like a Ron Paul rally. (Case in point: Paul supporters in Minnesota succeeded in knocking off the establishment pick for US Senate and instead nominating Kurt Bills, a high school economics teacher.)

“I would love to see a miracle, a lightning bolt that allows Ron Paul to be our presidential candidate,” says Kevin Erickson, one of Minnesota’s two delegates on the GOP platform committee. But he acknowledges that’s probably not happening. Instead, he’s focusing on working with the other Paul delegates on the committee to force a handful of concessions in the platform—relating to issues like the National Defense Authorization Act (which Paul and his supporters oppose) and the Federal Reserve. Paul delegates may not be able to turn Mitt Romney into a foreign policy dove, but they’re hoping for at least a concession reaffirming Congress’ power to declare war.

Given Paul’s independent-minded base, it’s not suprising that some of his backers aren’t content to work within the party structure. Jun Dam, the principal behind Grassroots for Liberty, a pro-Paul PAC, started a petition drive last month to encourage Paul to seek either the Libertarian or Constitution Party—a move that would throw the GOP contest into disarray. Now that both of those parties’ conventions have come and gone, Dam has a new plan: Create a second government. “It could just be a symbolic parallel government and those in our movement can formalize it as much as desired,” Dam explained in a blog post last week. “Ron Paul can be our president, or at least an honorary member.”