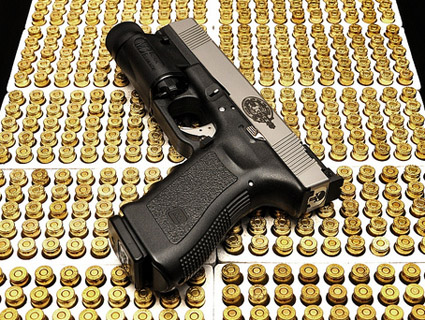 Barack Obama’s stealth war on guns continues apace: The White House is currently working to ease restrictions on exports of guns and other American-made weaponry, a move that could be a boon for domestic gunmakers.

The Department of Homeland Security has reservations about the rule changes, stating in a memo that they could make it harder “to prevent or deter the illegal export/transfer of lethal items such as advanced firearms to criminal groups, terrorist organizations or enemy combatants.” Gunmakers, however, are pleased as punch. “Our industry supports the White House Export Control Reform Initiative,” a lawyer for the firearms manufacturers’ lobby group, the National Shooting Sports Foundation, told the Washington Post.

How is the National Rifle Association going to spin this? The 4-million-member pro-gun group has put an electoral target on Obama’s back, but it also needs to do right by arms manufacturers like Colt, Smith & Wesson, and Ruger, which have given the NRA as much as $39 million since 2005, according to the Violence Policy Center (PDF).

The NRA is a big-tent organization—or, rather, a big tinfoil-hat organization. This rule change could feed right into their Obama conspiracy narrative: The president is just pretending to have no problem with guns, so he can really drop the hammer on gun owners in his second term! As NRA President Wayne LaPierre wrote in the Washington Times last November:

The Obama administration hatched a political conspiracy to deceive Americans and hide its true agenda to dismantle the Second Amendment and our freedom. By delaying its anti-gun legislative agenda, it’s tried to dupe gun owners into believing our fundamental freedom is safe.

The political calculation of the White House is clear: Deceive the voters and get re-elected at all costs and then, with no more elections to worry about, get busy dismantling the Second Amendment and destroying American freedom forever.

LaPierre’s been trying to pull the trigger on this conspiracy theory for a while, as my colleagues Kevin Drum and Tim Murphy have pointed out. Perversely, the NRA needs Obama to hand gun lovers a big win in order for its doomsday prophecy to gain currency. So will NRA members buy that increased gun exports actually signal a coming crackdown? As LaPierre says, “Gun owners aren’t fools—and are not fooled.”