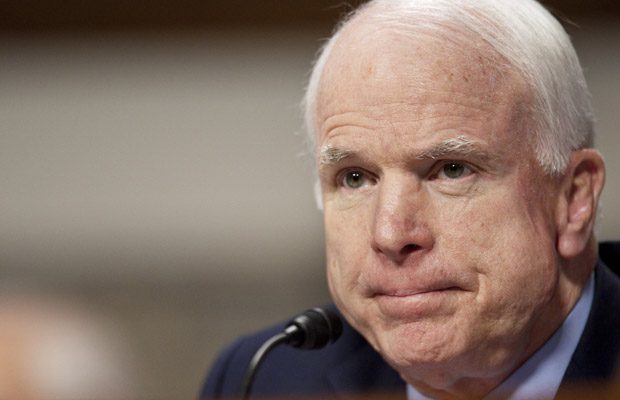 The maverick may be staging a comeback.

For more than two decades, Sen. John McCain (R-Ariz.) carved out a reputation as one of Congress’ feistiest reformers, a lawmaker willing to take on corporations, unions, wealthy benefactors, and sometimes the leaders of his own party. For years McCain fought alongside former Sen. Russ Feingold (D-Wis.) to ban unregulated, unlimited, undisclosed campaign cash known as soft money. He believed so strongly in campaign finance regulation and tough enforcement of the law that one former Federal Election Commission official recalls McCain telling him, “You’re doing God’s work.”

Yet McCain’s 2008 presidential bid disillusioned many of his reformer allies, such the good-government group Public Citizen. They watched with disgust as McCain distanced himself from campaign finance reform and his iconoclastic image. For his part, McCain felt hung out to dry by those allies after they supported Barack Obama despite all the political capital McCain had expended fighting for reform.

Now, however, McCain is starting to resemble his reformer self again. He slams the Supreme Court’s 2010 Citizens United decision every chance he gets. He has teamed up with Democrats to demand a rethinking of Citizens United and to craft a new bill that would beef up disclosure of campaign donations and political ads. “He is starting to exert himself, which he had not been doing over the past couple years,” says Craig Holman, the top lobbyist for Public Citizen.

McCain’s criticisms of the Supreme Court’s five conservative justices and their ruling in Citizens United—which allowed corporations and unions to spend unlimited treasury money on so-called independent expenditures—has been fierce. He caused a stir in January when he veered off script during a Mitt Romney campaign press call and launched into a tirade against super-PACs and the state of the political money wars. “I think the outside super-PACs and others [are] so disgraceful that I’m ashamed of the United States Supreme Court in their decision on [Citizens United],” he said. “I predict to you there will be a major scandal associated with the Supreme Court decision on Citizens United.”

McCain has since doubled down on his prediction: “I promise you, there will be huge scandals, because there’s too much money washing around, too much of it we don’t know who’s behind it, and too much corruption associated with that kind of money. There will be major scandals.”

“There’s really nothing better for the reform effort than having his commitment again,” Russ Feingold says. “He’s very tenacious about it, and he believes in it.”

In an interview with This American Life in March, McCain said that observing the oral arguments in Citizens United was “one of the most depressing times I’ve ever had here in Washington.” He blasted the conservative justices as naive and “clueless” and called Citizens United “one of the worst decisions in the history of the United States Supreme Court.” (McCain declined to comment for this story.)

Yet until recently, McCain’s broadsides resulted in little substantive action. Then a closely watched court case out of Montana gave McCain his opening. In December, the Montana Supreme Court upheld the state’s century-old ban on corporate political spending in state elections—a decision that contradicted Citizens United‘s rejection of such limits. The conservative group that challenged Montana’s ban, the American Tradition Partnership, has asked the Supreme Court to block the Montana court’s decision, which the court has done temporarily while it mulls a full review of ATP’s case.

Enter McCain. On May 18, he and Sen. Sheldon Whitehouse (D-R.I.) filed a bracing amicus brief with the high court criticizing the conservative justices’ logic in Citizens United—namely, that independent political spending by corporations doesn’t create “corruption or the appearance of corruption.” Wrong, McCain and Whitehouse say. They argue that such spending can corrupt, and that the Supreme Court must use the Montana case as a chance to rethink Citizens United.

In recent months, McCain has also been meeting with Democrats, including Whitehouse, on legislation to ramp up disclosure of outside political spending. McCain told The Hill that he wants the so-called DISCLOSE Act to apply to labor union contributions as well as corporate contributions, with the suggestion being that he might support the legislation. As it stands, the DISCLOSE Act would require outside groups to file disclosure reports with the FEC within 24 hours of spending $10,000 or more on election advertising. It would also require them to name all donors who give $10,000 or more and force the heads of outside groups to include an “I approve this message” tagline in their ads.

McCain’s talks with Democrats have breathed new life into the disclosure effort in Congress. An earlier, flawed version of the DISCLOSE Act died in the Senate in 2010 after Republicans, led by Senate Minority Leader Mitch McConnell (R-Ky.), filibustered the measure. McCain was among those who blocked the bill, which makes his interest in DISCLOSE Act 2.0 all the more encouraging to campaign finance reformers. “On the DISCLOSE Act, in the last Congress every single Republican marched in lockstep with Mitch McConnell,” Holman says. “This is not marching in lockstep.”

Supporters of campaign finance reform say McCain’s involvement could prove to be the crucial difference between DISCLOSE 1.0’s failure and DISCLOSE 2.0’s passage. “Mr. McCain could help drive the issue by defying his party’s monolithic dedication to unlimited and undisclosed political donations,” the New York Times‘ editorial board, a vocal support of campaign finance regulation, recently wrote. Seth Larson, a spokesman for Sen. Whitehouse, who introduced the Senate version of the new bill, says Whitehouse would be “thrilled” if McCain decided to support the DISCLOSE Act but declined to say more about McCain’s involvement.

Some supporters of DISCLOSE 2.0 remain skeptical of McCain’s latest overtures. Meredith McGehee, policy director at the pro-reform Campaign Legal Center, told The Hill she doubted that McCain would throw himself into the effort to pass the DISCLOSE Act. “He’d rather spend his political capital elsewhere,” she said. Sarah Dufendach, a lobbyist for the pro-reform group Common Cause, added that McCain “hasn’t shown any indication that he wants to be involved in this stuff anymore.”

Yet Russ Feingold, who has kept in touch with his former legislative partner, says McCain has fully rejoined the reform fight. Feingold points to McCain’s eagerness to cosign a January statement condemning the Citizens United decision on its second anniversary, McCain’s insistence that he and Feingold appear together on This American Life, the recent amicus brief, and DISCLOSE Act talks. All are signs that McCain the maverick is back. “There’s really nothing better for the reform effort than having his commitment again,” Feingold says. “He’s very tenacious about it, and he believes in it.”