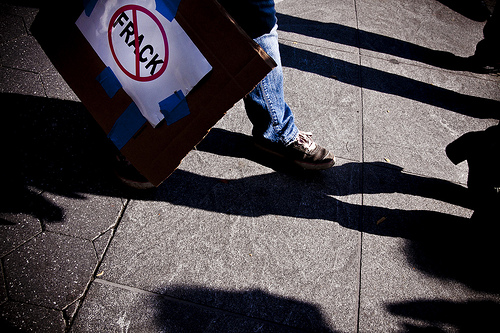 Pennsylvanians say that the state is ignoring their health complaints that they believed could be related to natural gas extraction. Residents say they have a hard time reaching state offices when they are seeking information or trying to register concerns, and the state hasn’t done a good job of tracking health issues, according to the Associated Press:

“Everybody kind of just passed the buck,” said Sheri Makepeace, a northwestern Pennsylvania resident who said that starting last year she tried calling the Department of Health and other agencies over fears that nearby drilling created health problems. “I’ve talked to so many different people and have gotten so many different stories.”

This story follows up on one from last month in which the Pennsylvania Department of Health reported that it had received just 30 health complaints related to natural gas extraction in the state. After that article came out, residents pointed out that it’s actually really difficult to report things to the health department. The recorded message at the phone number listed for health information and referral in the department doesn’t list gas-related issues as one of the menu options, or anything remotely close.

As one researcher working on this topic told me, she called that number numerous times and “never reached a human.” She either got a busy signal, she said, or was asked to leave a message. It made one wonder how many complaints the department is actually recording and addressing.

This latest story also comes after doctors and environmental activists in the state have raised concerns about a new law that they argue limits what doctors can do with information related to natural gas extraction. The law, passed in February, allows doctors to access information about the chemicals used in hydraulic fracturing in order to treat patients who may have been exposed. But the law also puts limits on how the doctors can use and share that information, requiring them to sign a non-disclousre agreement about whatever information they obtain. Opponents argue that this hampers doctors’ ability to study how many people are seeking treatment and to what they might have been exposed, closing down yet another avenue for information.