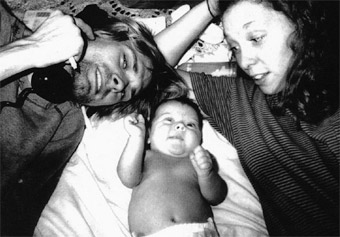 While on Hole’s Live Through This tour in 1995, drummer Patty Schemel bought a Hi8 camera to record the band’s offstage escapades. Nearly twenty years later, Schemel found the footage in her closet; worried that it would disintegrate, she took it to a friend, the filmmaker P. David Ebersole, to see how she could protect it. The next thing they knew, says Ebersole, “Patty and I started watching all of the footage together and she hadn’t seen it in at least 10 years…the memories began flooding back and we just started talking about what her whole story, her whole journey had been.” And with that, a documentary was born.

Hit So Hard traces Schemel’s story back to her youth as a gay teen growing up in isolated rural Washington, drumming for local punk bands (Kill Sybil, Doll Squad) and getting up to mischief with her brother, Larry. Eventually, she was recruited by Eric Erlandson and Courtney Love, who’d already gotten buzz for Hole’s debut, Pretty on the Inside. Schemel moved to Los Angeles, where she struck up a close friendship with Kurt Cobain, developed a serious heroin habit, and drummed on 1995’s Live Through This, the album that famously launched Hole to the status of international sensation just as addiction and overdose were wreaking havoc on its members’ personal lives.

“Being an alcoholic and an addict, that was my first love,” Schemel tells us early on in the film, which helps explain how after getting booted from the band during recordings of their third album, Celebrity Skin, she ended up on the street doing crack and prostituting herself until one day she finally had enough. Of Schemel’s decision to get clean, Ebersole says, “People always want there to be some sort of—this crazy moment of total rock bottom, ‘I was lying face down in a ditch’ or whatever. And it was simpler than that. It was just, ‘I was tired, and I decided to end it and get out of there.'” She went to rehab, kicked the addiction, and ended up happily sober with a wife, a kid, and—I kid you not—a dog-walking business.

The film covers all the familiar touchstones of rock docs: rise to glory, struggle with fame, traumatic addiction, fall from grace, redemptive recovery. It’s given a pretty conventional treatment here, though with a confusing structure and lack of focus, throwing in testimonies and commentary seemingly at will—Hole members Erlandson, Love, and Melissa Auf Der Maur all make appearances, as do a smattering of ’90s-era women rockers like Veruca Salt’s Nina Gordon and Beastie Boys drummer Kate Schellenbach, Schemels’ mother and brother and, somewhat perplexingly, Sarah Vowell.

The doc purports to be a story about Schemel, but also attempts to weave together a larger story about female musicians, sexuality, addiction, Hole, grunge; it’s by no means an impossible task, but this particular film never quite manages to pull off.

There’s nothing quite like Hole—explicitly feminist, messy, loud, out of control.

Yet despite the predictable subject matter and haphazard filmmaking, there are plenty of moments of real charm that make this a film worth watching. Right on cue, the 20-year nostalgia cycle has sparked renewed appreciation for the grunge and riot grrrl bands of the early ’90s, and the footage of huge crowds moshing at the likes of Lollapalooza will strike a chord both with those who were there and with more recently minted fans. Offstage footage, particularly of Schemel and Cobain goofing around his house in LA with baby Frances Bean and gossping and joking with fellow redhead Auf Der Maur on tour, is delightful. And present-day Schemel is funny and forthcoming: As she puts it, “You know when someone’s just full of shit. You know it. And you know when you hear people who have glossed over things, you know when they’re just in denial about stuff. So I was just like, why not just tell it? This is what it is, and this is the story.”

Still, Schemel too often feels like a supporting character. In the end, Cobain and Love steal the show; it’s hard to compete with Cobain sitting in a crib with baby Frances Bean, singing made-up songs to her in his underwear, or with Love before a crowd of thousands straddling an amp in her famous babydoll dress to the strains of “Miss World“—though her current self—disarmingly unguarded, garishly made-up, and talking with her mouth full throughout her interview—upstages them all.

The film is also a reminder that the ’90s were a golden era for women in music, with prominent female-led bands spanning a wide array of genres and styles. Now, though Schemel likes female artists like Tegan and Sara, Best Coast, and Dum Dum Girls, she thinks there aren’t as many in the cultural mainstream; instead, she says, she see a lot of “what middle America would like to see in a female artist—women that behave and sing songs about fashion and being a mama.” To be sure, there’s nothing quite like Hole—explicitly feminist, messy, loud, out of control; it’s not just nostalgia that’s sparked renewed interest in the band.

In any case, Schemel is working on the next generation: she teaches young drummers at LA’s Rock N’ Roll Camp for Girls, and is excited for the day when her nearly two-year-old daughter will get to see her play. She’s got a new band, The Cold and Lovely, with Megan Fisk of the Weepies and Nicole Fiorentino of the Smashing Pumpkins and Veruca Salt—their debut album is due out in June. And following a screening in New York, the members of Hole reunited to play their first show in years. Says Schemel, “It was cool, it started out just like it used to, where Courtney walks in backstage and just starts asking ‘what are the chords?’ because she can’t remember what the chords are for the songs. And then we went straight through—we did the songs and it was just really effortless to just play those songs again.”