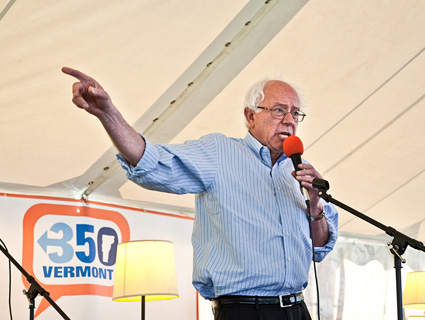 A new bill introduced yesterday could put a near end to fossil fuel subsidies. The “End Polluter Welfare Act,” introduced by Sen. Bernie Sanders (I-Vt.) and Rep. Keith Ellison (D-Minn.), would eliminate a long list ($113 billion’s worth) of tax break provisions aimed at oil, gas, and coal companies in the 2013 federal budget. Environmental groups such as 350.org and Friends of the Earth praise the bill as the most daring and comprehensive proposal to cut subsidies yet.

“This is a true stab at ending fossil fuel subsidies in full,” Treehugger‘s Brian Merchant writes.

If passed, the bill would:

Past experience doesn’t bode well for the likelihood that the bill would pass. As Merchant notes, a similar bill targeting big oil companies by Sen. Robert Menendez (D-N.J.) in March failed to pass through the Senate with the 60 votes required to avert a fillibuster.

Michael Briggs, a Sanders spokesperson, says they’ve got a plan. Their first goal is to mobilize popular support around the bill. “It’s important to let the public know about all of the egregious subsidies that exist in order to build support for ending them,” Briggs wrote in an email to Mother Jones. As of late yesterday, 904 people had signed onto a petition supporting the bill, he  says. Next they’ll look for cosponsors in Congress.