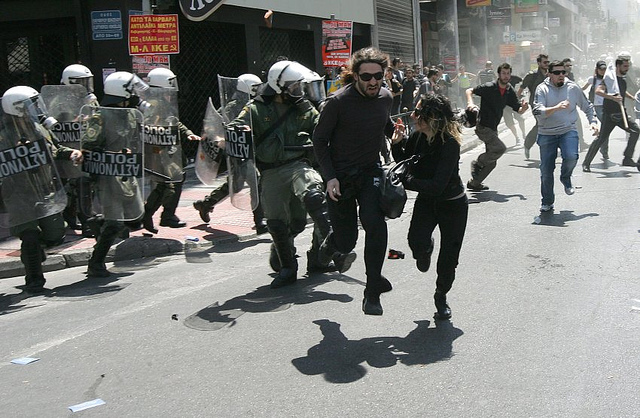 Turmoil over budget cuts roils Greek streets. France elects an anti-austerity president. Even Germany’s Austerity Queen Angela Merkel faces electoral backlash. It appears Europeans are getting sick of tightening their belts. But when you can’t cut any more, there’s little else to do but hustle up more cash.

For governments allergic to raising income taxes, a European Climate Foundation analysis released yesterday shows there’s a less painful way to slash deficits—one that could save the planet as it saves the economy: a carbon tax.

The report argues that reforming how Europe taxes energy could, by 2020, cut some countries’ 2011 deficits in half. Spain, whose deficit reached $116 billion last year (the third-worst in Europe), could add $13 billion in yearly revenue under the recommended plan. As a bonus, the report found that carbon taxes improve energy security and can reduce climate-changing emissions by up to 2.5 percent.

Krahe suggests starting with a tax on household emissions, which in the three case-study countries in the report (Spain, Poland, and Hungary), aren’t taxed at all, despite accounting for a quarter of Europe’s total emissions. Household carbon taxes are a bit of a hard sell, Krahe admitted, because politicians are loathe to add new taxes where none currently exist.

The fear, he said, is that without a safety net higher energy bills would devastate the families already hit hardest by austerity: “In Eastern Europe, you’re going to push some old grandmothers into poverty.” But the tradeoff is that revenue could be looped back to Granny in the form of increased social services; under a similar scheme about to commence in Australia, over half the money raised from taxing carbon will be sent back to households via tax cuts and other assistance.

The authors argue another way to squeeze out more revenue is to force countries to tax carbon at a consistent rate. Countries with low carbon taxes like France and Poland should find middle ground with Portugal, which, at around $100 per ton of carbon dioxide, has the highest average energy tax in Europe.

If all this talk of taxes sends a shiver through anyone with a drop of fiscally conservative blood in their veins, Krahe points out that since European leaders agree on the need to raise revenue, the question is not if, but what, to tax. Direct taxes on income, the report found, “could have twice as much negative impact on GDP as energy taxes which raise the same revenues between 2013 and 2020;” both forms of taxes had similar employment impacts. In other words, a higher income tax would be worse for the economy—and without any environmental benefits.

Another option the report scrutinizes is reworking the EU’s seven-year-old cap-and-trade plan, arguing that lowering the overall emissions cap (which would push carbon prices up) could raise an additional $38 billion in carbon credit auction revenues, while again taking a smaller bite out of GDP than higher income taxes.

Back in the US, where reducing the national debt is a perennial hot issue (especially in an election year), the idea of a carbon tax or cap-and-trade plan never seems to stick. But a Congressional Budget Office report found that 2009’s ill-fated cap-and-trade bill would have increased federal revenues by $100 billion a year. Meanwhile, economists and environmental analysts from the nation’s top institutions insist that carbon pricing is an indispensible tool for fighting climate change.

Ted Gayer, a Brookings Institute environmental economist, said that although carbon pricing in the US has faced stiff opposition from energy industry lobbyists, it’s sound policy for both the climate and the economy.

“This is meaningful revenue,” he said. “It’s an arrow that should be in the quiver.”