Update, 5/31/12: Today, Buddy Roemer announced the suspension of his presidential campaign, noting that “the lack of ballot access in all 50 states makes the quest impossible for now.” He vowed to keep fighting “the enemies of reform” with a nonpartisan effort to “re-energize our republic.”

On an unusually balmy March evening in Washington DC, a crowd of polished Beltway types—consultants, advocates, lobbyists, and the usual politicos—listen attentively to former Louisiana Governor Buddy Roemer at a salon on money in politics at a historic row house. Roemer, (in the South it’s pronounced “roma”) dives right into his speech, his distinct Shreveport accent and Methodist preacher rhythm echo in the room. “Washington isn’t broken”—brief, effective pause—”it’s bought!” The slight, white-haired 68-year-old drops phrases like “Goldman-friggin’-Sachs” with fire-and-brimstone inflections. The crowd listens politely. “It’s not the White House I want,” Roemer roars in his final crescendo. “I want a free America!”

You could be forgiven for having missed it, but Roemer has been running for president. A Harvard-educated four-term congressman, one-term governor, and successful banker, he campaigned for more than a year. In a field light on Southern Republicans (Newt Gingrich was born in Pennsylvania and Rick Perry, well…), he once might have looked like a contender. But not in the eyes of Republican tastemakers. Roemer was not invited to a single one of the 20 primary debates, a fact he repeats with unmitigated animosity. Which is why, after 20-plus years as a Republican convert (he started his career as a Democrat), he quit the party in February.

His third-party run was based on a signature issue: not accepting any campaign contributions exceeding $100. In a political system awash in money, it’s a compelling concept, but then again, why $100? Why not $500? Why not the federally mandated maximum of $2,500 per donor, still peanuts compared to the million-dollar checks being written by superwealthy super-PAC donors? When you press him on this, Roemer defaults to folksy. “I hope people see past my farm”—a sly reference to his family’s 2,000-acre plantation—“into my heart and see what the future ought to be—a president who’s free to lead.”

Roemer had hoped to be on the 2012 presidential ballot in all 50 states. Getting there has been anything but easy. He was 4,000 votes shy of securing the nomination of Americans Elect (which is now in disarray after its failed attempt to recruit a third-party candidate). Roemer was also seeking the Reform Party nomination.

“I hope people see past my farm”—
his family’s  2,000 acre plantation—”into my heart and see what the future ought to be—a president who’s free to lead.”

Roemer says he’s always fought the corrupting influence of money. As a congressman in the 1980s, Roemer claims, he never took PAC money. “Tip O’Neill used to laugh at me, ‘You can’t win, Buddy.’ I won every time.” Actually, according to FEC records, he took $8,600 from 19 PACs in 1980 and $49,200 from 112 PACs in 1982. He recently tweeted that he never took an earmark, yet he was happy to tout federal funds for an airport and parking garage in Shreveport in the early ’80s.

“Often wrong, but never in doubt,” is how Louisiana blogger and pundit C.B. Forgotston describes Roemer (quoting former Speaker of the House O’Neill’s characterization of Roemer). Louisianans practice the art of the euphemism—”That’s just Buddy being Buddy,” you’ll hear—but there’s a general consensus: Buddy is smart. Very smart. And Buddy is stubborn. Very stubborn. He’s brilliant and then without reasoning, immovably obstinate. It’s not just the donation cap. When he ran for governor he didn’t allow his campaign to use lawn signs. Why? Well, that’s just Buddy being Buddy.

Roemer won his first election for Congress as a Democrat in 1980, the same era when the South was turning solidly Republican. But Roemer’s tenure took an unpredictable turn when, in the middle of his first term, his father, Charles, was convicted in a federal sting known as BriLab, as in bribery plus labor.

Charles Roemer had served as commissioner of administration for Governor Edwin Edwards (who once said of bribes, “It was illegal for them to give, but not for me to receive”). Charles Roemer had arguably the most powerful position in the state, holding responsibility for millions of dollars in contracts. Charles, then in his 60s, ended up going to prison for 17 months, though his conviction was later overturned. 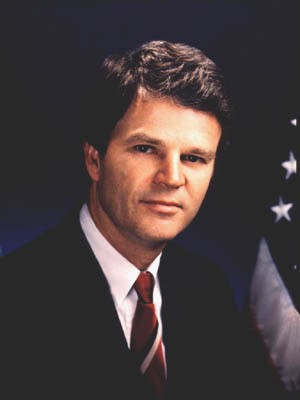 Buddy the dragon slayer: Roemer as governor of Louisiana Louisiana Secretary of StateEven as he ran a campaign built entirely around the issue of political corruption, Roemer didn’t mention his father’s legal troubles on the stump. But when I asked him directly, he didn’t flinch. “He served with the Master of Corruption as his right hand,” says Roemer, referring to Edwards. “Dad was the clean animal in the room, but corruption is a powerful thing. It imprinted on my soul—if corruption can get a guy like Dad…everybody is vulnerable.”

For his next three terms Roemer ran for Congress unopposed while Edwards was indicted for mail fraud, obstruction of justice, and bribery. (Full disclosure: I am Edwards’ second cousin, through marriage.) In 1987, Roemer entered a crowded gubernatorial field as a relatively obscure Congressman. He dubbed his campaign the Roemer Revolution, his devotees Roemeristas. The press dug it. He was asked in a debate if he’d endorse then-incumbent Edwards in a general election. “No, we’ve got to slay the dragon,” he said. “I would endorse anyone but Edwards.” Roemer went from last place to first in the polls in a matter of weeks. Every major newspaper endorsed the congressman from Caddo Parish. “Slay the dragon!” became his battle cry.

This experience of being catapulted into office has stuck with Roemer. It’s why he was optimistic about getting to a 15 percent showing in the polls, so he’d get an invitation to the debates in the fall. (He hit three percent in New Hampshire and South Carolina in January. His website cites a poll that shows him at seven percent nationally.) “The race is wide open,” he tells me. Naive? Yes, but stranger things have happened and they’ve happened to Buddy Roemer. Back in ’87, due to Louisiana’s “jungle primary” process, in which the top two vote getters advance to the general election regardless of their party, both Roemer and Edwards ended up competing for the governorship as Democrats. Edwards ceded, and Roemer in effect won the highest office in the state with just 33 percent of the vote.

Roemer’s governorship was by all accounts (even his own) a storied catastrophe in a state with a high tolerance for disasters. His agenda was dead on arrival. He failed to reach out to his “coalition of reformers” after he was elected. He became the first governor in modern Louisiana history to have his own party override his veto. His wife divorced him. He sat alone in the governor’s mansion night after night, watching old movies. And then he switched parties and became a Republican.

“Dad was the clean animal in the room, but corruption is a powerful thing. It imprinted on my soul—if corruption can get a guy like Dad…everybody is vulnerable.”

When I asked him why, he said, “Of the 144 members of the legislature, 138 were Democrats. Would you call that a one-party state?” (Actually, 120 were Democrats.) Only Buddy Roemer would explain a party switch by saying he wished to be in the minority. Former governor Edwards, who released from prison in January 2011, put it to me like this: “Roemer is an unbelievable political opportunist who doesn’t pick good opportunities.”

Three years into Roemer’s term, Edwards announced he was running to win the governor’s mansion back. In the jungle primary, Roemer came in third, behind white supremacist David Duke. Governor Roemer left the state with a billion-dollar deficit. LaPolitics.com columnist John Maginnis reported that Edwards said to him during the race, “The best thing that can happen to me is to get elected and die the next day.”

Does Roemer feel a kinship with earlier third-party candidates—Ross Perot, say, or Ralph Nader? “A little bit,” he says, then quickly dismisses the comparison. “This is the Internet time—they didn’t have the Internet.” But third-party candidates tend to share certain qualities, chief among them a faith in the righteousness of their own beliefs, even when very few people agree with them. This appeals only to the very stubborn or the very rich. By Perot standards, Roemer—now the president of the Louisiana-based commercial bank Business First—is not very rich. But just like his predecessors, his mantra is simple: “My issue is change, but different than anybody else.”

Roemer had a pivotal moment in the months after Hurricane Katrina, one that hints that his run is less vanity project and more sincere rabble-rousing. While bodies were still floating down the street, the Wall Street Journal reported, a meeting of white business owners and old-line families plotting to keep New Orleans’ poor, black residents from returning. They saw the tragedy as an opportunity to remake the city. 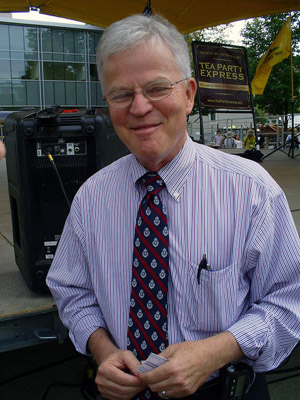 Roemer came out against this idea. “I’ve heard conversations [among] those who would leave the poor out,” he told the AP. But, he added, “New Orleans goodness and decency” would win out. He bucked his party and his class and stood up for the disenfranchised. Roemer watchers think this was the seed of his current incarnation as an anticorporate populist.

If you ask Roemer now where he stands on the issues it’s like talking to a Republican from a pre-Fox News time capsule. Abortion? He’s pro-life, but the mother’s life comes first. Gay rights? Up to the states. China? Needs trade reform. Unions? Taft-Hartley is a good law (which is a Louisiana way of saying he’s not pro-labor.)

But his keystone issue remains money in politics. And it’s perhaps ironic, perhaps logical, that he appealed mostly to Democrats. There were no invitations to appear on Hannity, but Roemer has been on Rachel Maddow’s show more than once. NPR interviewed him. He came out in support of Occupy Wall Street. Some 45 percent of his donations, he told me, were from self-declared Democrats, 35 percent are from Republicans, and 20 percent are from independents.

He had the standard laundry list of what he’d do as president: Create a team across party lines to rebuild America, et cetera. But his goals soon started to sound more personal, like the things he admittedly didn’t do as governor: “Listen first. I will give credit to others.” It’s almost as if he’s seeking atonement. Usually when candidates talk of reform, they don’t mean themselves. Roemer, it seems, did.

“I’ll make different mistakes as president,” he pledges. And I’ll bet you $100 he’d be right.