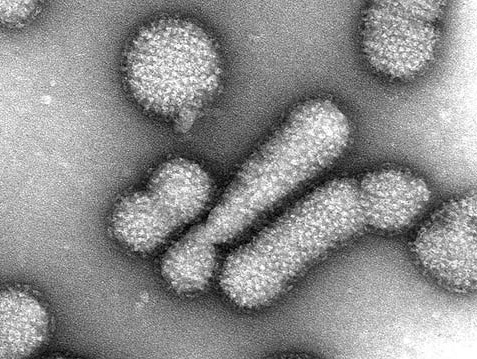 Anyone who’s had the flu knows viruses can be powerful. But scientists at the Lawrence Berkeley National Laboratory are working on technology that will be able to harness that power to generate electricity.

Their research, published this month in Nature Nanotechnology, envisions a future in which viruses will help us take the energy from running, slamming doors, and climbing stairs and turn it into renewable energy we can use to power our gadgets. The project uses paper-thin generators covered in viruses (nice viruses, not the ones that make you sick) that can be implanted into places like our shoes. The viruses will take the mechanical energy generated by that motion, and convert to an electric charge. I’ll let the scientists explain:

The scientists tested their approach by creating a generator that produces enough current to operate a small liquid-crystal display. It works by tapping a finger on a postage stamp-sized electrode coated with specially engineered viruses. The viruses convert the force of the tap into an electric charge.

Their generator is the first to produce electricity by harnessing the piezoelectric properties of a biological material. Piezoelectricity is the accumulation of a charge in a solid in response to mechanical stress.

Piezoelectricity is already used to power small devices like electric cigarette lighters, the scientists note. But the current products require toxic chemicals, which makes them less appealing. Using viruses like the M13 bacteriophage, which is benign to people, is a much better option, for a number of reasons:

Being a virus, it replicates itself by the millions within hours, so there’s always a steady supply. It’s easy to genetically engineer. And large numbers of the rod-shaped viruses naturally orient themselves into well-ordered films, much the way that chopsticks align themselves in a box.

The scientists describe virus-powered generators that could be used to charge iPods, cellphones, e-readers, or other small personal devices. That would certainly bring new meaning to the term “going viral.”

Here’s a short video they made explaining the technology: