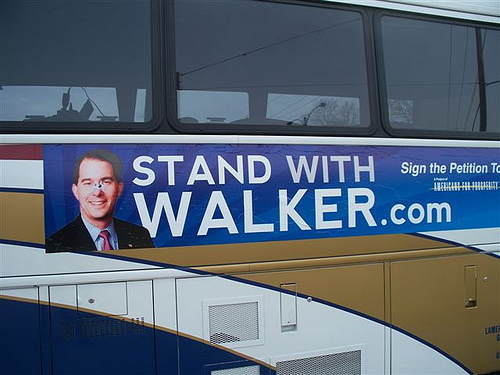 American for Prosperity's "Stand with Walker" bus tour in 2011. <a href="http://flickr.com/link-to-source-image">Wisconsin Public Radio</a>/Flickr

This week, the Wisconsin chapter of Americans for Prosperity, the conservative nonprofit with ties to Charles and David Koch, launches a four-day, 10-city bus tour to “highlight the successes we have had in Wisconsin and lay the ground work for the challenges to come.” AFP’s “A Better Wisconsin” tour hits the road just days before the state’s hugely anticipated gubernatorial recall pitting Gov. Scott Walker against Milwaukee Mayor Tom Barrett, as well as four state Senate recall elections that will decide who controls the Senate. AFP has promoted its tour to state and national media, and no less than AFP national president Tim Phillips will be on hand to rally Wisconsinites.

Given the tour’s timing and billing, any reasonable person would view it as a statewide drive to get out the vote for Walker and his GOP allies in the June 5 election. Not AFP.

AFP’s Wisconsin director, Luke Hilgemann, says the bus tour has nothing to do the recall elections. “We’re not dealing with any candidates, political parties, or ongoing races,” Hilgemann told the Hudson, Wisconsin, Patch news site. “We’re just educating folks on the importance of the reforms.”

Hilgemann added that the tour’s speakers will be discussing “the importance of the budget reforms and why Wisconsin taxpayers and citizens can’t afford to move backward away from those reforms to the day of old where we had huge budget deficits and bloated government.”

There’s a reason AFP isn’t mentioning specific candidates: As a 501(c)(4) nonprofit organization, AFP can’t make pure politics a majority of what it does—or else it could lose its tax-exempt status. But if the group’s leaders claim to only be educating people about issues, that’s in line with its mission as a “social welfare” organization.

Wisconsin Democrats aren’t buying AFP’s claim that its upcoming tour is solely about issues. “Scott Walker’s out-of-state special interest patrons are rightfully nervous that Scott Walker, their corrupt investment, is about to go belly-up,” says Graeme Zielinski, a spokesman for the Democratic Party of Wisconsin. “They will and have done everything in their power to prop up his anti-Wisconsin political machine.”

AFP-Wisconsin isn’t the only state chapter planning to rally around Walker for the recall. As Republic Report notes, AFP-Illinois says it will bus supporters to Wisconsin days before the election for a rally and canvassing, with food provided.

Nor is this the first time AFP has bussed in supporters to show support for Walker and his agenda. The group’s “Stand Against Spending. Stand With Walker” bus tour in March 2011 cruised across the state for four days to “take a firm stand against wasteful government spending and support responsible economic policies like Governor Walker’s,” according to AFP’s Tim Phillips.