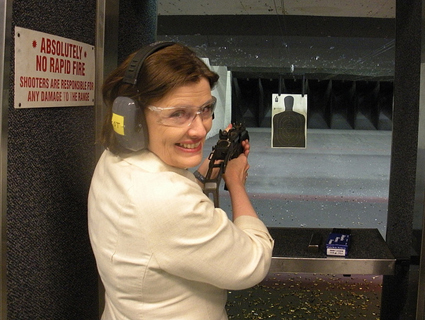 If you live in Middle Tennessee, get ready for another four months of overheated rhetoric about Islam. On Thursday, tea partier and anti-Shariah activist Lou Ann Zelenik announced that she’s challenging incumbent Rep. Diane Black (R), setting up a rematch of a 2010 GOP primary that focused heavily on the question of whether Muslims in Murfreesboro should be allowed to build a new mosque.

In that campaign, Zelenik lashed herself to the mosque issue, speaking at a march to protest the construction, and accusing Black of being soft on Shariah. As she told Talking Points Memo, “This isn’t a mosque. They’re building an Islamic center to teach Sharia law. That is what we stand in opposition to.” Zelenik feared that a new mosque in Murfreesboro would be a stepping stone to a more sinister end—the encroachment of radical Islam into Middle Tennessee. It wasn’t a winning issue, it turned out, but Zelenik’s argument resonated in the city. Later that year, a handful of residents filed a lawsuit to block the construction of the mosque, arguing that Muslims weren’t protected by the First Amendment because Islam is a totalitarian political system, not a religion (the Department of Justice was forced to file an amicus brief noting that, yes, Islam is a religion).

Although Black took a relatively moderate stance on the mosque when she ran for Congress, promising to respect Tennesseans’ freedom of religion, she has an anti-Islam history, too: as a state Senator, she sponsored Tennessee’s 2010 law designed to ban Islamic law from being enforced in state courts.

The added wrinkle here, which should give the primary an added degree of out-in-the-open animosity, is that until two weeks ago, Zelenik was being sued by Black’s husband. The suit centered on an ad Zelenik ran during the 2010 pointing out that then-state Sen. Black had steered contracts to her husband’s forensic science business. Black and his company, Aegis Sciences, considered this charge defamatory, but the court ruled that Zelenik’s spot was accurate, and in this case the truth was the only defense necessary. So: drama.

One quibble, though: The Murfreesboro News-Journal notes that Zelenik will step down from her job at the Tennessee Freedom Coalition, “a nonprofit 501(c)4 organization that has been instrumental in sounding the alarm over the growing Islamic movement in America and the threat of Sharia Law.” That’s not quite accurate, as there is no real threat from Shariah law in the United States. More accurately, TFC has been instrumental in running around stirring up fears over a phantom menace. This would be a small point, except that Murfreesboro is ground-zero for the Islamophobia movement, so it’s something the local newspapers really ought to get right.