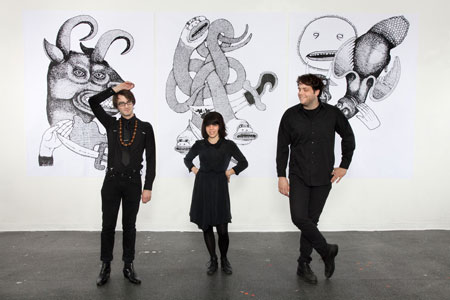 The New Jersey punk band Screaming Females got its start in 2005, playing underground house shows and the all-ages venues in its hometown of New Brunswick. The band gradually built a rep for energetic live shows and a distinctive sound, and have since played more than 700 self-booked shows, including tours with the likes of the Dead Weather, Dinosaur Jr., Titus Andronicus, and Ted Leo. The trio consists of bassist “King Mike” Abbate, drummer Jarrett Dougherty, and front woman Marissa Paternoster, who plays guitar. “A lot of people take our band name literally, which is kind of funny because I don’t know if that really happens to most bands,” says Paternoster. “Like, when people talk about Echo and the Bunnymen do they get ticked off because when they go to the show there’s no half-man-half-rabbit playing on the stage?”

They’re not particularly scream-y, either: The musicians have an ear for melody, and Paternoster unleashes her shrieks judiciously as part of an expressive style that builds off throaty alt-rock vocals with a clear, ringing vibrato and guttural yowls. Screaming Females fifth album, Ugly, released earlier this month on Don Giovanni Records, represents a continuation of their slow but steady growth. “Every time we put out a record, more and more people pay attention,” says drummer Dougherty.

Ugly has perhaps garnered extra attention by virtue of the fact that it was recorded with Steve Albini, founder of seminal punk band Big Black, who’s engineered albums for artists from Joanna Newsom to Nirvana. Working with a big name is new for Screaming Females after years of bare-bones production, and they put more time into the preproduction in anticipation.

Still, they arranged and reworked the songs themselves—less out of some dogmatic devotion to DIY than their desire to press the band’s individuality. “It’s our own little, individual art project that’s different from every other one in the world because this is how the three of us wanted to do it,” says Dougherty, who started taking a more active approach to band management after reading the DIY manifesto Our Band Could Be Your Life. But while the new album has gotten a lot of press, Dougherty says, “we’ve never been a flash in the pan; we’ve never been a really hyped band at any one particular moment.”

And that’s a good thing: “Industry is trying to get involved in cheaper ways in smaller bands,” he says, “to get their tentacles in there early before bands are smart enough to realize they might not have their best interests at heart.” Rather than having an explosion of the DIY ethos as the music industry collapses, Dougherty says, “there’s all these tiny little punk, indie-rock bands that have, like, Sailor Jerry’s sponsorship plastered all over their CDs and their tickets and their websites and Twitters and stuff.” Had Screaming Females taken such offers in the early days, he predicts, “I’d go so far as to guarantee you we wouldn’t be a band anymore.”

While Dougherty won’t speak for the band as a whole, he ventures that “we are conscious and thoughtful people…we try to encourage a little bit of thought in the people we do shows with” without getting preachy about it. The past few years, Dougherty says, have changed his political outlook. “I went through a period of just assuming that if I changed my attitude and the way I lived my life to what I thought was appropriate, then that was good enough, and that was all that anyone could do…I’ve come to realize in the past few years that it’s more the systematic issues in the world,” things that go beyond individual choices. “Putting some of that out into the world is cathartic for me, just trying to let everyone else out there know that they’re not alone in some of the feelings.”

To that end, Dougherty occasionally posts political content on the band’s blog, ranging from reading lists that include the likes of David Graeber, bell hooks, and Chris Hedges, to video of the famous Chomsky-Foucault debate. “It’s kind of amazing how radical world-renowned authors are, when you open them up and start talking about their content,” he explains. 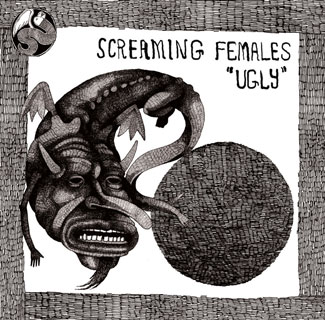 Singer Paternoster, who studied drawing at the Mason Gross School of the Arts, does almost all of the Screaming Females artwork, which tends towards monstrous creatures and distorted features. “I grew up looking at a lot of contemporary photography, you know, Robert Mapplethorpe, Diane Arbus photographs, and I think those had a lot of influence on me. Both those photographers take a lot of pictures of freaks, for lack of a better word, so I think I sort of adopted that subject matter. Except I don’t take photographs, I draw pictures.”

For the Ugly artwork, Paternoster says, she “looked at a lot of Biblical, early 18th century etchings, Biblical etchings, stuff like that…But a lot of it is just what I might feel inclined to draw and I don’t think much about it at all.”

Musically, Paternoster frequently cites alt-rock bands like Sleater-Kinney, the Pixies, and Smashing Pumpkins as touchstones, but other influences aren’t so obvious. “One of my favorite guitar players is this guy John Fahey, kind of a folky guy,” Paternoster said. “I like a lot of really quiet, sad music. I like Elliott Smith a lot and I like Low a lot, which maybe wouldn’t be apparent from listening to our band.” (They’re more noticeable in Paternoster’s lower-key, largely solo work with Noun, a band she started as a teenager.) As for people she’d love to work with, Paternoster says “PJ Harvey is someone who’s like a big hero; it would be so neat to play shows with her…Her first two records are so incredible, the first time I heard them I was completely obsessed. She’s been around forever and she’s still making such cool stuff.”

The Females’ current tour is bringing them out West for the first time in almost two years; Paternoster has been chronicling the band’s adventures on their blog with her “crappy digital camera.” So far, she reports, it’s been going well—save for a few equipment malfunctions and a run-in with a tornado in Nebraska. If you want to catch a show, you’ll find their tour schedule here; in the meantime, check out the video—a “funny idea we had and ran with”—for “It All Means Nothing,” a near-perfect four minutes of pop-inflected punk that kicks off the new album.