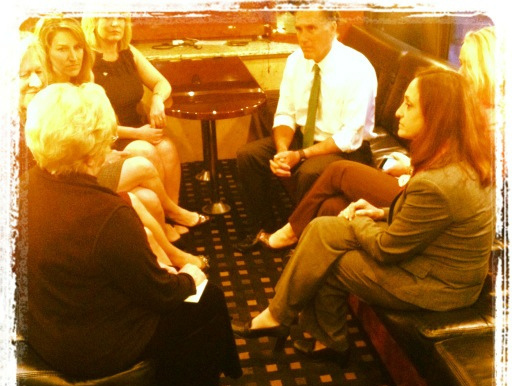 On Thursday, one day after Democratic commentator Hilary Rosen suggested that Ann Romney had “never worked a day in her life” on CNN (she has since apologized), Mitt Romney attempted to portray President Obama as anti-mom by pushing out a statement from Penny Nance, the president of Concerned Women for America.

But the CWA, an Evangelical outfit founded by Beverly LaHaye (wife of Left Behind creator Tim LaHaye), might not be the best messenger if Romney wants to persuade female voters he’s a moderate candidate who has their best interests in mind. In response to Romney, American Bridge, the pro-Obama opposition research outfit, just blasted out a quick cheat-sheet on what, exactly, the Concerned Women for America are so concerned about. (Hint: It’s not equal pay for an equal day’s work.)

CWA Article Attacked Harry Potter For Indoctrinating Children With Witchcraft.  According to an article published in the Family Voice, a CWA publication, parents “are now trying to protect their children from classroom discussions about paganism and the occult” when Harry Potter is read in classrooms.  The article argues that “Harry Potter is part of a larger trend to bring occult themes to younger children.”  [Family Voice, November/December 2001]

CWA Opposed Pregnant Mother From Running For Office.  In 1998, Jane Swift announced she would campaign for Massachusetts Lt. Governor.  The announcement by Swift led to “Conservative groups such as Concerned Women for America and the Christian Coalition of Massachusetts [who] are openly critical of the Republican mom-to-be, saying Swift’s decision is not ‘in the best interest of the child.'”  [Chicago Tribune, 6/7/98]

This is an agonizingly dumb controversy amplified by Twitter and entirely removed from any substantive public policy debate. But it does reveal a few holes in Romney’s armor going forward. In his push to reverse the damage done by members of his party (himself included) to his reputation with female voters, he’s quickly finding that he’s sorely lacking in plausible surrogates. To defend his position on the Lily Ledbetter Fair Pay Act, he brought out Reps Cathy McMorris-Rogers (R-Wash.) and Mary Bono-Mack (R-Cal.)—who both voted against the law. To defend the charge that raising kids is a full-time job, he brought out former First Lady Barbara Bush, hardly the archetypal working mom. They don’t exactly have their finger on the pulse of the American swing voter right now.