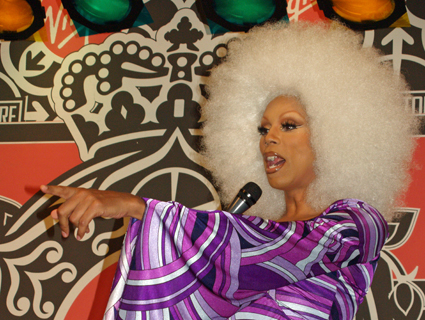 The freakout began, as many such freakouts do, over a museum display. On Saturday, the new Appomattox, Virginia branch of the Museum of Confederate History had its grand opening, with a rendition of the Star Spangled Banner and the ceremonial flag-raising of the 14 states in the Confederacy. It all seemed innocuous enough. But as the blog Southern Heritage Alerts explained, there was trouble. Just a few days earlier, a “flagger” (Lost Cause jargon for someone who publicly displays the Confederate flag) went on a “recon” mission to the museum a few days before its official grand opening and spotted a life-size image of VH1 star Ru Paul dressed in a bedazzled Confederate flag dress. (Here’s a photo.)

Immediately, Lost Causers sprang into action. “This is Waite Rawls flipping the bird to all Southerners,” read one characteristic blog comment, referring to the museum’s director. “You must get in ‘these peoples’ face and spit and spit again!,” read another. “Kid gloves ain’t gonna work with this trash!!!! They spit on YOU and YOUR heritage everyday!!!!” Another commenter wondered aloud, “How could this have been allowed to happen even for a soft opening to me it is both hateful and disrespectful not alone what were small children to make of this.” The Sons of Confederate Veterans, one of the nation’s leading Neo-Confederate groups, put out a statement blasting the display.

Finally, the Washington Times, the paper of record for this kind of thing, got to the bottom of the story after talking to Rawls himself:

When reached, Mr. Rawls acknowledged that the Ru Paul likeness was up “for about six hours, and then taken down for good.” He said it was someone’s idea for an eye-catching example of the way a flag can be improperly used, but early “soft opening” visitors wasted no time in making their strong objections known, and the display was removed. He laughingly said it might be used for lining chicken coops in the future.

Fortunately it was no longer in evidence on Wednesday when some sixty students, parents and teachers from the Appomattox County School system became some of the first invited guests to enjoy the new facility.

So there you have it. The sons and daughters of the Sons of Confederate Veterans have been saved from the prospect of seeing the Confederate flag desecrate Ru Paul.