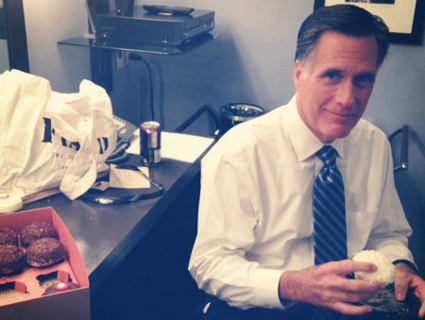 Politico‘s Mike Allen and Evan Thomas are out with the latest installment of their behind-the-scenes account of the 2012 race, and I’d encourage you to check it out if you’re into that kind of thing. By now you may have already heard the book’s biggest revelation—that Texas Gov. Rick Perry was heavily dosed with painkillers prior to the October Bloomberg debate in New Hampshire, prompting him to do things like walk into the men’s room whistling “I’ve Been Working on the Railroad” and then stand at a urinal “companionably close by” a rival campaign manager. Which, honestly, explains a lot.

There’s also this stirring defense of Mitt Romney, by his son, Tagg:

“In his spare time, he wants to solve problems,” Tagg Romney said in an interview. “He wants to figure out, when he comes over to your house, he wants to figure out, ‘Well, your boiler’s not working. How are we going to fix the boiler?’ and ‘Have you noticed that some of your trees are dying out there? Why are your trees dying? What’s causing that? Can we figure that out, and can we go down to the hardware store and see if they’ve got something to fix that?’ And all of a sudden you see him driving a tractor in your backyard, and he’s pulling stuff up.

[Emphasis added.] There are a couple ways of looking at this. The high-brow take is that Romney, as Ben Wallace-Wells put it in New York Magazine, is a consultant to the core, forever looking for ways to make things—like the health care system—work better. (This is either the best or worst thing about Romney, depending on where you stand.)

The low-brow take is that Mitt Romney’s fixation with trees goes even deeper than previously thought. Consider:

He is our generation’s John Muir.