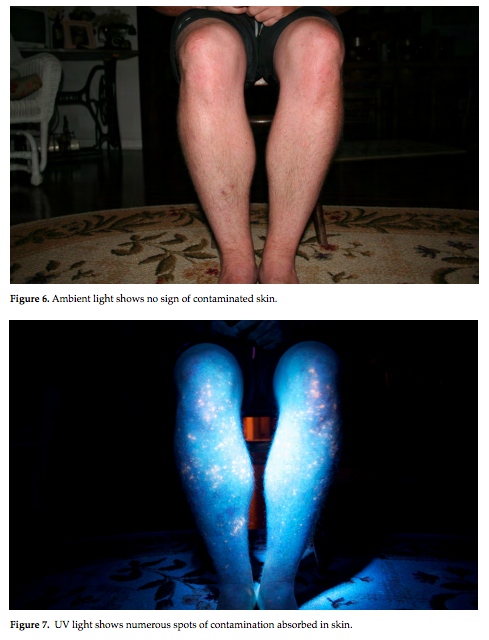 The Surfrider Foundation has released its preliminary “State of the Beach” study for the Gulf of Mexico from BP’s ongoing Deepwater Horizon disaster.

Sadly, things aren’t getting cleaner faster, according to their results. The Corexit that BP used to “disperse” the oil now appears to be making it tougher for microbes to digest the oil. I wrote about this problem in depth in “The BP Cover-Up.”

The persistence of Corexit mixed with crude oil has now weathered to tar, yet is traceable to BP’s Deepwater Horizon brew through its chemical fingerprint. The mix creates a fluorescent signature visible under UV light. From the report:

The program uses newly developed UV light equipment to detect tar product and reveal where it is buried in many beach areas and also where it still remains on the surface in the shoreline plunge step area. The tar product samples are then analyzed…to determine which toxins may be present and at what concentrations. By returning to locations several times over the past year and analyzing samples, we’ve been able to determine that PAH concentrations in most locations are not degrading as hoped for and expected.

The report states: “Toxicology studies to determine effects of Corexit® dispersant on dermal absorption rates of carcinogenic PAHs through wet skin are needed to assess risk to human health and safety.”

Worse, the toxins in this unholy mix of Corexit and crude actually penetrate wet skin faster than dry skin (photos above)—the author describes it as the equivalent of a built-in accelerant—though you’d never know it unless you happened to look under fluorescent light in the 370nm spectrum.? The stuff can’t be wiped off. It’s absorbed into the skin.

And it isn’t going away. Other findings from monitoring sites between Waveland, Mississippi, and Cape San Blas, Florida over the past two years: