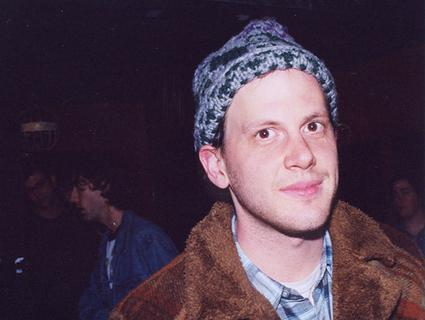 There’s this weird thing that happens when you finally get to see a musician perform whose songs you know by heart and have listened to for over a decade. It’s especially weird when that musician gave up music after an emotional crisis, leaving only those songs for you to connect with, divorced entirely from their creator and perhaps made more special for being tied up in all that existential turmoil.

Last week, when Neutral Milk Hotel’s Jeff Mangum played two sold-out nights at the Fox Theater in Oakland, the experience was similarly complicated for many of the thousands of diehard NMH fans who excitedly tapped their feet to songs it’s safe to assume many of them have cried to now and again. But the experience was palpably important: The man had, over the years, begun to matter as much as the music.

In a rare interview in 2002, Mangum told Pitchfork that “a lot of the basic assumptions I held about reality started crumbling” after the release of the much-revered 1998 classic In the Aeroplane Over the Sea. “I had this idea that if we all created our dream we could live happily ever after,” he said. But when his dreams came true and his friends were still unhappy, he apparently “realized that I can’t just sing my way out of all this suffering.”

So Mangum decided to drop out of the music scene entirely. As the years went by, his withdrawal became legendary: Slate described him as indie rock’s Salinger, while Pitchfork called him its “most reclusive man.” Fans resigned themselves to a future of listening to Neutral Milk Hotel only in recorded form, or in the form of overly emotional covers by their musician friends. His music became instantly nostalgic.

Then, a few years ago, Mangum began slowly creeping out of his self-imposed exile. In October 2008, he played a surprise show in Brooklyn. Over the next couple of years, he played a few benefit concerts and a couple more surprise sets. Last January, Mangum announced a fall tour, and the floodgates opened: Since then, he’s appeared on the show Parks and Recreation, played at Occupy Wall Street, released a box set, and added dozens of tour dates—including a set at any recluse’s worst nightmare, the ultra-hypefest of Coachella. No one’s quite sure why Mangum decided to come out of hiding; he may be touring, but he’s still not talking. (We have a sneaking suspicion some of his coming-to-terms has something to do with his 2007 marriage to Astra Taylor, the writer and filmmaker who directed the philosophy-docs Zizek! and Examined Life.)

At times, the show felt like a business transaction between fans and a reluctant idol giving us exactly what we wanted.

In any case, after so many lean years, it was virtually guaranteed that the faithful, long-suffering fans of Neutral Milk Hotel would come out full-force. Sure enough, Mangum packed the Fox, a historic 3,000-person theater recently restored to its 1928 grandeur. It’s a strange venue for an acoustic set—you’re very aware of the smallness of the lone performer—yet Mangum managed to fill the yawning space with just a guitar and his voice, remarkably unchanged after a decade. Really, almost everything about him seemed unchanged: same plaid shirt, same chin-length hair, same floppy messenger hat. The songs, too, were unchanged. His performance was technically near-perfect, and though it was missing the scratchy layer of lo-fi nostalgia present in the albums, he played out all of his “hits” in succession, exactly as everyone would like to hear them.

And therein lay the problem, if you could call it that. Mangum—whose diehard fans, according to Will Butler of the East Bay Express, “five years ago really truly believed they had about as much chance of seeing…as seeing Elliott Smith”—showed virtually no indication of emotional growth, or, for that matter, emotion. It was almost as if the last decade of self-imposed exile hadn’t happened. He smiled, plowed through his most-beloved songs, and graciously provided encores. At times, the show felt like a business transaction between fans and a reluctant idol giving us exactly what we wanted.

Beforehand, a friend had commented of Mangum’s In the Aeroplane Over the Sea: “It’s kind of weird that a psychedelic folk concept album about World War II could connect so personally with so many people.” Looking around, it was clear that the members of this crowd had all connected really personally with Mangum’s music at some point in their lives. But any connection with Mangum himself perhaps had been too imaginary for too long, and maybe it was time to put that to rest. His music remains, unchanged and all the better for it.