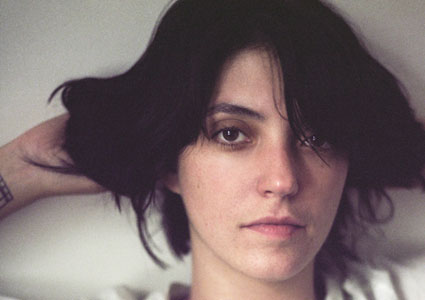 When I called her one morning a couple of weeks ago, Sharon Van Etten was on the road, driving a stretch from Ohio to Michigan. (“It’s kinda bleak,” she observed, accurately.) The context felt appropriate, considering that her new album, Tramp, released last month on Jagjaguwar, takes its name from the singer’s nomadic existence during the 14 months it took to complete. Tramp has been winning her widespread attention and acclaim, but it’s been a long journey to get to this point.

Van Etten was born and raised in suburban New Jersey, where she grew up performing in local choir groups and singing show tunes. (“They definitely informed my sense of melody and how to write harmonies and how to work with other singers,” she says. “I don’t think the dancing has come into play yet but maybe I’ll incorporate that eventually?”) After graduating from high school in 1999, she moved to Tennessee, where she (temporarily) attended college, worked at a café, and kept her open mic nights secret from her controlling, insecure emo-band boyfriend who thought her songs were too revealing.

They eventually broke up, and Van Etten moved back to Jersey and later to Brooklyn, where she got an internship at indie record label Ba Da Bing. She also caught the attention of TV on the Radio’s Kyp Malone, the brother of a high school classmate, who helped introduce her to the local music scene; she spent her days promoting other musicians’ work but didn’t tell coworkers that she was spending her nights writing songs and playing around town.

They found out soon enough: In 2009, she released her debut album, Because I Was in Love, on a small label called Language of Stone. A year later, Ba Da Bing released her second album, epic—her former boss there is now her manager—and toured with The Antlers (for whom she’d sung backup on their album, Hospice) and Neko Case. After she saw a video of The National’s Aaron Dessner and Bon Iver’s Justin Vernon covering her song “Love More,” she contacted Dessner, and they made plans to work together on what eventually became Tramp.

“I’ve had people write me about ‘We Are Fine’ and say, like, ‘I had no idea you deal with anxiety!'”

Both were busy, though, so recording took place between long stretches of touring—including a European tour with Van Etten and her band opening for the National. Bouncing between friends’ houses and sublets, sleeping on couches for weeks at a time, Van Etten worried about wearing out her welcome. She learned to write MIDI files on her computer so she could work late at night without disturbing hosts and roommates. But the scarcity of privacy “made time more precious, so when I had a moment alone I was like, ‘I need to write now.’ I was desperate to write.”

Amid the transience, the recording sessions with Dessner in his Ditmas Park garage-studio were the one constant for Van Etten. And because she didn’t have much in the way of practice space, the songs she brought to the studio were “stripped down” and “restrained,” but they took on new dimensions as Dessner and other musician friends—including Beirut’s Zach Condon, Wye Oak’s Jenn Wasner, the Walkmen‘s Matt Barrick, and Julianna Barwick—added beats, harmonies, and backgrounds.

Van Etten has been forthcoming about her struggles with social anxiety, chronicled in the song “We Are Fine,” and the fact that she wanted Condon, who also has social anxiety, to play on that particular track. (“I’ve had people write me about ‘We Are Fine’ and say, like, ‘I had no idea you deal with anxiety! What are your secrets?'”) Other songs took shape more spontaneously, with Van Etten playing an outline for a friend and “letting them do what they wanted.”

Reading the Letters of Anaïs Nin and Henry Miller and Patti Smith‘s memoir Just Kids, Van Etten says, made her think about writing as a time capsule. “Whatever you’re writing is about, you’re really connected with it and you can always go back to when that was. I remember everything, and time and place are like a center for me.” She recalls writing “Warsaw” in Poland while on tour with The National and “Give Out” while opening up to her then-future boyfriend for the first time after a bad set. “Serpents” was written in the old basement in Bushwick where she first started playing electric guitar, and she penned “Kevin’s” at a sublet owned by a guy named—yes—Kevin. “Every place had a different kind of energy,” she says, so writing on the move contributed to the distinctive sound of the new album. “I was nervous that it ended up being a really schizophrenic-sounding record because I was so scattered, but ultimately, that ended up being one of the strong points.”

Van Etten’s got an apartment now, but she’s back to vagabonding for the next few months as she tours the country with songs from Tramp (details here). Beyond that, she’s got plenty in the works: “I have a lot of alter-egos: I would love to be a back-up singer for someone someday. I have an electronic side-project, I have a ’90s grunge side project, I have a piano project….I have this industrial goth-electronic song, super creepy sounding, just really dark and dreary.” And as impressive as her guest roster on Tramp is, she’s got some other dream collaborations: “I would love to work with PJ Harvey some day,” Van Etten says, and with labelmate Vernon, with whom she performed a duet for the Sounds of the South project last May.

She’s constantly writing and working on scraps of songs, she says, but it’s hard to know what will resonate with others. “Magic Chords,” for example, almost didn’t make it onto Tramp, but Dessner fought for it and people “really responded.” When I tell Van Etten that it’s one of my favorite tracks on the album, she laughs. “That’s why I love music, because it’s so personal,” she says. “People relate to songs so differently. No matter what it’s about in reality, people create their own meaning behind it and connect with it on their own terms.”