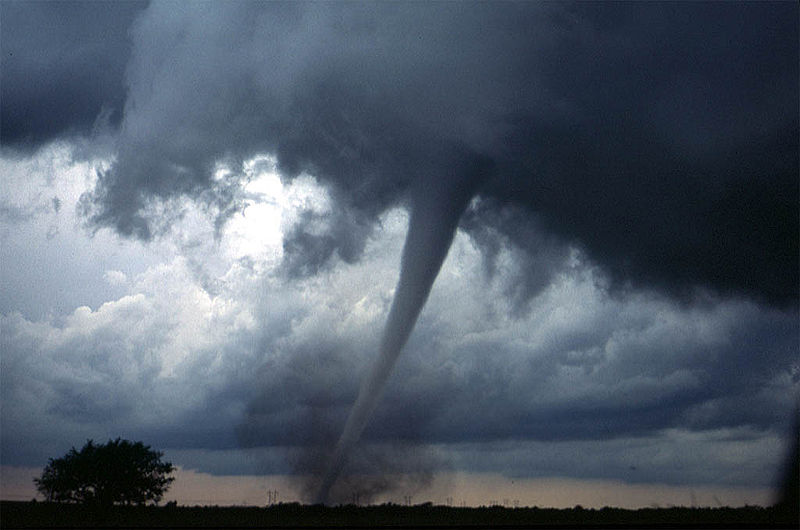 Credit: Daphne Zaras via <a href="http://www.nssl.noaa.gov/headlines/dszpics.html">NOAA</a>.

A monster EF4 tornado with winds of 180 mp/h (290 km/h) that caused extreme damage in Harrisburg, Illinois, on leap day happened to travel across an array of seismographs recently deployed for studying earthquakes.

The scientists working with the OIINK array (named for its coverage of parts of the Ozarks, Illinois, Indiana and Kentucky) thought their instruments had been destroyed by the twister. Instead, the seismographs recorded the tornado.

Or rather not the tornado itself, as their preliminary investigation suggests, but the passage of the large atmospheric pressure transient pushing ahead of the thunderstorm that spawned the tornado… one of an anomalous number of tornadoes so far this winter. Some of which may add up 2012’s first billion-dollar disaster in the US . 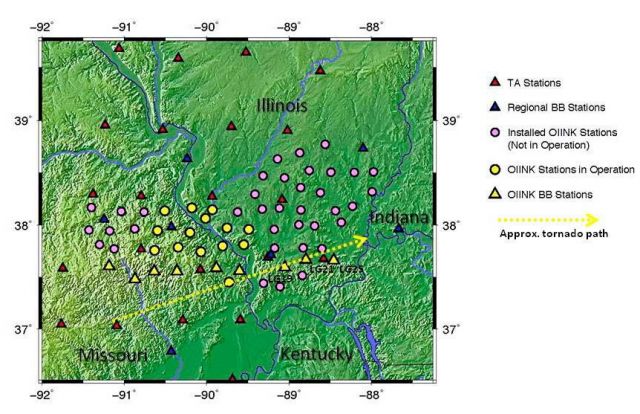 Location of seismographs in eastern Missouri and southern Illinois and the path of the tornado that struck Harrisburg IL on 29 Feb 2012: Courtesy of Indiana University University

In the image above you can see the seismic stations sets against the ground path of the 29 Feb Harrisburg tornado. These stations are part of the NSF’s EarthScope program planned to cover the entire US with a grid for detecting and better understanding and eventually maybe predicting earthquakes. Seems they might come in handy for tornadoes too.

I wrote about the EarthScope program here after Japan’s 9.0 quake last year.

This animation shows  EarthScope stations lighting up in response to ground shaking following a 21 February 2008 earthquake in Wells, NV. From the video’s YouTube page:

Each circle represents a seismometer and the colors change to reflect variations in the signal amplitude crossing the array. The ground motion begins near the source and then expands outward like a the waves from a pebble dropped in a pond. The circular wavefronts are distorted by the simple map projection used in the animation. The initial waves travel at about 8km/s, the larger amplitude waves that follow are moving at about 2.5km/s.

The amazing EarthScope array has been dubbed the upside-down telescope for its view into the dynamics of interior Earth.