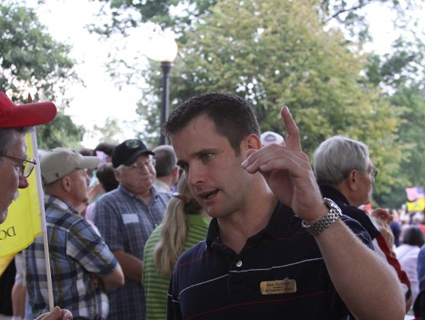 It was sort of buried under the news of Mitt Romney’s—surprise!—blowout victory in the Illinois primary, but there was another election on Tuesday with national implications: In Illinois’ newly configured 16th congressional district, freshman Rep. Adam Kinzinger knocked off 10-term incumbent Don Manzullo by double digits to the win the GOP nomination. Manzullo was expected to retire after redistricting but ran anyway, and was opposed by House Majority Leader Eric Cantor, whose Young Guns super-PAC chipped in $50,000 in radio ads. So Kinzinger’s win shouldn’t come as a total surprise.

But what’s interesting in this case is the involvement of the the Campaign for Primary Accountability, the anti-incument super-PAC I profiled earlier this month. Chaired by Texas construction magnate Leo Linbeck III, the goal of CFPA is to fund primary challenges to longtime incumbents, regardless of party. The group spent $200,000 on ads attacking Manzullo for, among other things, voting to fund the National Endowment for the Arts. CFPA has now been a factor in six House races—seven, if you count the preemptive retirement of Indiana pumpkinshooter Dan Burton (R)—and been on the winning side of three of them, knocking off Ohio GOP Rep. Jean Schmidt in addition to Manzullo and Burton. (In the other Illinois primary of note on Tuesday, CFPA-backed challenger Debbie Halvorson lost handily to Democratic Rep. Jesse Jackson Jr.)

Kinzinger would have challenged Manzullo anyway, super-PAC backing or not; his alternative was to run against Jackson in a heavily Democratic district which includes Chicago’s South Side. But midway through the primary campaign, the CFPA is happy to take credit.

“We fell in all six races we’ve accomplished our purpose—we’ve increased turnout, we’ve increased participation in the primary process, and we’ve made these races more competitive,” says Curtis Ellis, the super-PAC’s spokesman. “If you look even at last Tuesday’s results [in Alabama], [GOP incumbent] Spencer Bacchus spent $1.6 million contacting voters. That’s something he hasn’t done in this century! His vote totals were 59 percent. That’s the lowest he has ever received. His challengers got 41 percent of the vote. That’s a more competitive election than that district has ever seen since Spencer Bacchus took office in 1992. Our success has never been measured in candidates being defeated. Our success is measured in how competitive these elections are. And in all cases, they’re more competitive than they’ve ever been.”

The group plans to release a new list of incumbent targets on Thursday; long-tenured congressmen from safe seats are officially on notice.