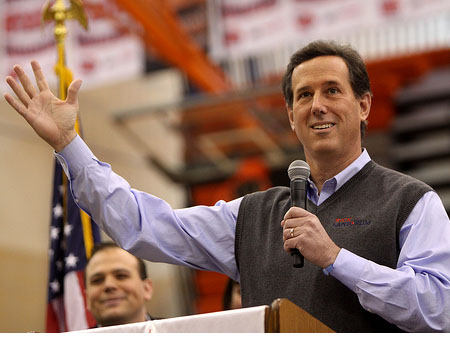 Rick Santorum has a new column over at Red State, in which he declares that thing that separates him from the rest of the lingering members of the GOP primary field is his strident disbelief in the “pseudo-religion” of global warming. Climate change, he declares, is “the litmus test” of “radical environmentalism” that should be rejected by all true conservatives.

Santorum begins the piece by condemning the Obama administration for enacting polices to address the issue. “We are the collateral damage of the war against global warming,” he claims, grouping himself and everyone else with workers in the fossil fuels industry who might lose jobs because of greenhouse gas regulations.

But he saves the brunt of his criticism for rivals Mitt Romney and Newt Gingrich, accusing them in the headline of the piece of being “blown and tossed by the winds of political correctness” in their previous statements supporting action on climate change. He writes:

Of all the GOP candidates, I am the only one who has not bowed, and will never bow, to this liberal orthodoxy. I did not pander when global warming seemed cool to the press and to Hollywood. We know that climate changes over time, that he earth warms and cools over time. This debate is about whether human activity plays a role, and whether U.S. emissions cuts can have any effect when China and India refuse to go along. The apostles of this pseudo-religion believe that America and its people are the source of the earth’s temperature. I do not.

Of course it’s nothing new for Rick Santorum to bash climate science. He’s called it a “beautifully concocted scheme” and just another way for Democrats to create “a system that forces you to do what they think you should do.” But this latest column includes a culture-war flourish on the issue that Santorum has stopped short of offering before.