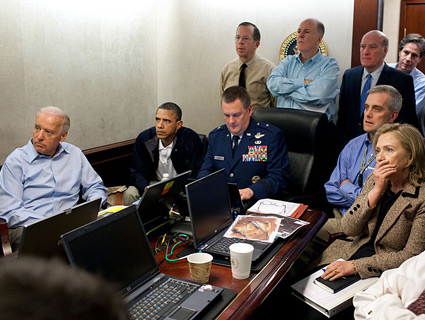 In political warfare, truth matters little. That’s what Karl Rove demonstrated today in a Wall Street Journal op-ed piece that blasted the 17-minute film recently released by the Obama reelection campaign. This campaign infomercial notes that the Osama bin Laden raid President Obama launched was the “ultimate test of leadership.” Rove, who served a president who did not defeat Bin Laden in such a fashion, begs to disagree—and he claims that Bill Clinton backs him up on this point.

As for the killing of Osama bin Laden, Mr. Obama did what virtually any commander in chief would have done in the same situation. Even President Bill Clinton says in the film “that’s the call I would have made.” For this to be portrayed as the epic achievement of the first term tells you how bare the White House cupboards are.

Yet that is not what Clinton said about the decision. George W. Bush’s ex-brain is engaging in highly selective editing. Greg Sargent notes that the full Clinton quote in the film presents a much different perspective, for Clinton said of Obama:

He took the harder and the more honorable path. When I saw what had happened, I thought to myself, “I hope that’s the call I would have made.”

He hoped. So Rove flipped the meaning of Clinton’s words 180 degrees.

My new book, Showdown: The Inside Story of How Obama Fought Back Against Boehner, Cantor, and the Tea Party, details the nail-biting decision-making prior to Obama green-lighting the bin Laden mission and shows it was indeed no routine move.

On the night of April 28, 2011, Obama held a top-secret meeting with his closest national security aides to discuss how to proceed. The CIA had earlier informed Obama that its analysts had concluded there was a 60 to 80 percent certainty that Bin Laden was in the Abbottabad compound. But the agency had conducted a red team exercise, in which a set of analysts who had not previously worked on this case evaluated the intelligence. This group ended up with lower odds: 40 to 60 percent.

Several of Obama’s national security advisers were worried by the red team results. Michael Leiter, the chief of the National Counterterrorism Center, believed the CIA had inflated the case. And when the president went around the horn and asked for recommendations, both Vice President Joe Biden and Defense Secretary Bob Gates counseled waiting for more definitive intelligence. Other advisers in the room opted for a missile strike (which would be less risky but could yield a less definitive outcome and cause collateral damage). Leon Panetta, then the CIA chief, and John Brennan, Obama’s chief counterterrorism adviser, backed the proposed helicopter raid. Such an operation, though, was not supported by a majority of Obama’s advisers. Everyone in the room knew that much could wrong with such an operation. (Gates had lived through Black Hawk Down and the failed Desert One rescue attempt during the Iranian hostage crisis during the Carter administration.) And they also realized—though it was not explicitly discussed—that if the Bin Laden mission went bad, it would probably sink Obama’s presidency. Nevertheless, the next day, Obama greenlighted the raid.

After the mission was successfully completed and the president had received word that bin Laden had been killed, he worked on a statement with aides and told them what he considered to be a significant aspect of the raid. “It’s important to be able to prove that America could do something difficult that takes a long time,” he said. That was the message he wanted to convey to his fellow citizens.

Rove, the fellow who put a president in a flight suit and had him land on an aircraft carrier where he spoke in front of a “Mission Accomplished” banner, now contends this was no big deal. He obviously hasn’t read the book—or bothered to consider the facts.