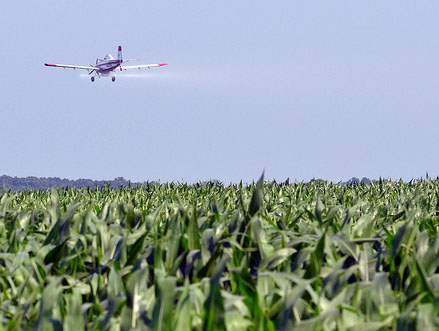 I’m not even sure if I understand the attacks on the Obama administration’s energy and environmental policies from Mitt Romney at a speech in Chicago on Monday (via TPM). First, there was this line, which is an oft-repeated fallacy among Republicans:

And the government would have banned Thomas Edison’s light bulb. Oh yeah, Obama’s regulators actually did just that.

The Obama administration did no such thing. The Department of Energy is merely following through with the phase-out of inefficient bulbs under new standards set as part of the 2007 Energy Independence and Security Act. It doesn’t “ban” Edison’s incandescent bulbs—it only requires that they be as energy-efficient as alternatives now on the market. Oh, and it was President George W. Bush who signed that bill into law. But Republicans have been flogging the bulb issue for three years, so I’m not surprised that Romney brought it up.

It’s this later line from Romney’s speech I find rather confusing:

President Obama hopes to erase his record with a speech. In a recent address, he said that, “We are inventors. We are builders. We are makers of things. We are Thomas Edison. We are the Wright Brothers. We are Bill Gates. We are Steve Jobs.”

The reality is that, under President Obama’s administration, these pioneers would have found it much more difficult, if not impossible, to innovate, invent, and create.

Under Dodd-Frank, they would have struggled to get loans from their community banks.

A regulator would have shut down the Wright Brothers for their “dust pollution.”

The last line repeats the false allegation that the Obama EPA is regulating dust. It’s not. Nor does it plan to any time soon. But what does that have to do with the Wright brothers? Is he referring to “crop dusters,” the small planes used on farms? If so, he really must have no idea what they are, because the “dust” that he refers to is usually pesticides or fertilizers, not actual dust. I’ll take this as an indication that Romney has never been to an actual farm.