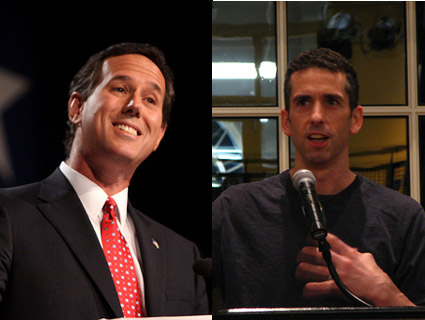 Savage’s redefinition took hold, so much so that his “Spreading Santorum” site quickly became one of the top three Google search results for Santorum’s name. It’s since dropped to the eighth result, but the GOP contender still has a major Google problem.

Asked what he’d say to Savage if the two met, Santorum replied:

I would tell him that I’m praying for him. He obviously has some serious issues. You look at someone like that who can say and do the things that he’s doing and you just pray for him and hopefully he can find peace.

I emailed Savage to see what he had to say about that. He wrote back:

Rick Santorum thinks that women who have been raped should be compelled—by force of law—to carry the babies of their rapists to term, he thinks birth control should be illegal, he wants to prosecute pornographers, etc., etc., basically the guy wants to be president so that he can micromanage the sex lives of all Americans…and I’m the one with issues? Because I made a dirty joke at his expense eight or nine years ago and it stuck? I’m the one with issues?

Rick can pray for me. I’ll gay for him. And we can call it even.