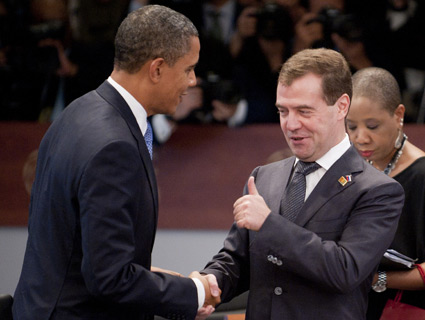 On Tuesday morning, Mitt Romney’s foreign policy team sent an open letter to President Barack Obama—via the National Review Online—that excoriated Obama for his inadvertently recorded comment to Russian President Dmitry Medvedev in South Korea. Prior to a press conference, Obama had leaned toward Medvedev and said, “On all these issues, but particularly missile defense, this can be solved, but it’s important for him [Prime Minister Vladimir Putin] to give me space.” He added, “This is my last election. After my election I have more flexibility.” Not shockingly, Romney’s brain trust pounced on the remarks, claiming that the statements “raise questions about whether a new period of even greater weakness and inconstancy would lie ahead if you are reelected.”

But the Romneyites—and much of the reporters and commentators who have covered the so-called hot-mic gaffe—have missed the context: Obama’s 2010 fight to ratify the New START treaty.

As it happens, my new book, Showdown: The Inside Story of How Obama Fought Back Against Boehner, Cantor, and the Tea Party, details this dramatic tussle—a tale of Republican recalcitrance that nearly upended decades of bipartisan arms control policy.

Here’s an abbreviated run-down. Early in his presidency, Obama began negotiations with the Russians on a follow-up accord to the START treaty first proposed by President Ronald Reagan. (START stands for Strategic Arms Reduction Treaty.) The New START would compel both the United States and Russia to downsize their stockpile of strategic warheads to 1,550 each within a few years. The cuts were moderate, but the treaty would revive a weapons inspections process that had ended with the expiration of the previous START agreement. Just as important, the treaty would help Obama improve relations with Moscow (as he sought Russia’s help in pressing Iran regarding Tehran’s nuclear program) and demonstrate that Obama was serious about his pledge to place the world on a path to a nuclear-free future.

Before the ink was dry on the accord, Senate Republicans—notably Jon Kyl and John McCain—started howling about the treaty. They claimed the treaty would hinder US missile defense efforts—even though arms control experts noted this was not the case. Kyl, the Senate Republicans’ leading voice on nuclear arms matters (who, of course, doesn’t really believe in arms control treaties), spent months questioning the accord and relentlessly engaged in fine-print back-and-forth with the administration. He also used his leverage to squeeze billions of dollars in extra funding from the White House for maintaining the existing nuclear weapon stockpile. But toward the end of 2010—during the post-midterms lame-duck session—Kyl declared there was no time to consider ratification before the congressional session finished. This was an effort to sabotage the agreement.

But Obama pushed on, as Vice President Joe Biden courted moderate Republicans to assemble the two-thirds majority needed for ratification. In those final weeks, leading Senate Republicans assailed the White House push for ratification. They claimed the treaty was being bum-rushed through the Senate, even though it had been afforded more hearings and debate time than previous START treaties. Kyl went so far as to accuse Obama of “disrespecting one of the two holiest days for Christians” by debating the treaty so close to Christmas. (Would Jesus object?) Senator Jim DeMint declaimed the situation as “sacrilegious.” And McCain and Senator Lindsey Graham told Biden they would only consider supporting the treaty if Obama dropped his attempt to repeal the Don’t Ask/Don’t Tell policy at the Pentagon prohibiting out-in-the-open gays and lesbians from serving in the military. In the final days of the ratification debate, Obama, Biden, and Senator John Kerry, who was leading the ratification drive, had to outmaneuver McCain to prevent a defeat. They did so in a rather clever fashion. (For those details, you’ll to have to read Chapter Four.)

The president eventually won ratification on a 71-to-26 vote. The treaty was a modest one, yet, as the New York Times noted at the time, “No Russian-American arms treaty submitted for a Senate vote ever squeaked through by a smaller margin.”

The point is this: The Senate Republicans turned the bipartisan-backed New START treaty into a major political clash in a way that had never been done before. Given that this pack is even stronger in the Senate these days, it is no wonder that Obama would tell Medvedev that any arms control initiatives would be quite difficult to manage in the months prior to the 2012 elections. With New START, Republicans demonstrated they were willing—even eager—to politicize such issues. Kyl threatened torpedoing the treaty if the White House didn’t spend billions of dollars more on the nuclear stockpile. (Though he got his money, he went ahead with this threat.) McCain and Graham denounced ratification in hyperbolic terms (while signaling their votes for a treaty governing world-destroying weapons could be procured if Obama dumped his Don’t Ask/Don’t Tell repeal).

Obama skillfully navigated the Republican intransigence with New START. But the episode showed how hard it is for the White House to deal with the Senate GOPers on this critical front. And with Romney and other Republicans decrying Obama as a weak-kneed appeaser and apologizer—who kowtows to Russia—Obama is right to conclude that this is not a good moment to pursue the hard work of US-Russia arms control. There is indeed little political space available for this important endeavor, and the Republicans outraged about Obama’s hot-mic remark are responsible for that.

For more information on Showdown: The Inside Story of How Obama Fought Back Against Boehner, Cantor, and the Tea Party (William Morrow), click here.