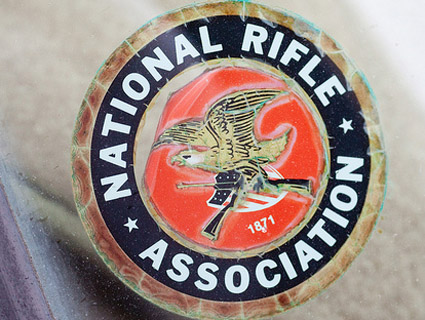 On April 26, 2005, Florida Gov. Jeb Bush signed into law SB 436, better known as the “Stand Your Ground” law, which gave Floridians the right to use deadly force to defend themselves in public without first trying to flee from a threat. Nearly seven years later, the law has exploded into public view with the killing of 17-year-old Trayvon Martin in Sanford, Florida. Police released the shooter, George Zimmerman, the night of the killing after he claimed self-defense; ever since, there has been a firestorm of debate over the wisdom of Stand Your Ground laws, also known as “shoot first” laws, which now exist in 24 states.

Get all the latest updates on the Trayvon Martin story in our explainer.

The money trail leading to the watershed law in Florida—the first of the 24 across the nation—traces primarily to one source: the National Rifle Association. When Gov. Bush conducted the 2005 signing ceremony, standing alongside him was Marion Hammer, a leader and familiar face from the pro-gun lobbying powerhouse. But the NRA’s support for the Stand Your Ground law was far more than symbolic. An analysis by Mother Jones of election and lobbying records reveals that the NRA was instrumental in creating Stand Your Ground: Over a nine-year period the organization gave more than $73,000 in campaign donations to the 43 Florida legislators who backed the law. That money was buttressed by intense lobbying activity and additional funds spent by the NRA in support of the bill’s introduction and passage.

The NRA’s point man in the Florida legislature was state Rep. Dennis Baxley (R). In the late 1990s and early 2000s, Baxley, a card-carrying NRA member and an ally of Bush’s, reaped financial support from the NRA’s Political Victory Fund. In 2000 Baxley received a $500 campaign donation from the NRA (the state’s legal limit per election cycle) on top of nearly a thousand dollars more in independent spending backing him. By 2004, the NRA awarded Baxley its “Defender of Freedom” award. And in 2007, the NRA spent a whopping $35,000 on radio advertising to support Baxley in a primary fight. (He lost.)

State Sen. Durell Peaden (R), who introduced his chamber’s version of the bill, raked in $1,000 in direct donations from the NRA during the 2000 election cycle. The NRA also spent nearly $1,500 in independent expenditures on his behalf. Other top recipients included GOP state Senators Rudy Garcia, Bill Posey, and Ken Pruitt, who together received more than $22,000 in support in the late 1990s and early 2000s. All told, more than a third of the 114 Florida lawmakers who co-sponsored the Stand Your Ground bill enjoyed the NRA’s financial backing between 1996 and 2005.

The NRA Political Victory Fund also twice donated the $500 maximum to Jeb Bush, during his 1998 and 2002 gubernatorial campaigns. And between 1996 and 2004, it gave $55,000 to the Florida Republican Party, which in turn spent big money to boost Republicans in state legislative and gubernatorial races. According to the National Institute on Money in State Politics, the NRA and its Political Victory Fund have given $2.6 million to state-level campaigns, political committees, and candidates in the past decade.

Thanks to the NRA’s former president, a top lobbyist said, “Floridians may now defend themselves against violent criminals without fear of prosecution or civil lawsuit.”

Campaign cash, however, was only part of the NRA’s strategy for passing Stand Your Ground legislation in Florida. Beginning in early 2005, the gun rights group launched a lobbying blitz behind Baxley and Peaden—promoting news stories about Peaden’s campaign to pass the Stand Your Ground law and blasting out an “Action Alert” urging its members to contact their state legislators and pressure them to support the bill. “The citizens of Florida have a right to expect absolute safety within their own homes or vehicles and to be able to use all manner of force against an unlawful intruder/attacker,” the alert said.

Florida lawmakers in particular felt the heat from the NRA’s Hammer, who lobbied them intensely for months during the run-up to the vote. After Gov. Bush signed the bill, the NRA’s top national lobbyist, Chris Cox, hailed Hammer’s role in the law’s passage: “Thanks in no small part to the tireless efforts of our own former President Marion P. Hammer, law-abiding Floridians may now stand their ground and defend themselves against attack by violent criminals without fear of criminal prosecution or civil lawsuit.” (Hammer did not respond to a request for comment.)

Back in 2005, critics blamed the NRA as much as Florida lawmakers for Stand Your Ground’s passage. “The NRA is a very powerful lobby and a lot of members don’t want to cross it,” said state Rep. Dan Gelber (D) who opposed the bill. Sarah Brady, chair of the Brady Campaign to Prevent Gun Violence, told the New York Times, “The populace in Florida is very much common sense and on our side, but the State Legislature is very conservative and the NRA has control of them…It’s just a terrible, terrible bill.”

Today, as the Trayvon Martin controversy continues to unfold, Hammer and the NRA find themselves on the defensive over Stand Your Ground. Under pressure, Gov. Rick Scott has called for a special task force to revisit the 2005 law—though its members will be selected by Republican Attorney general Pam Bondi and four pro-gun Republicans lawmakers. The creation of that task force has been delayed, much to the ire of Democratic lawmakers in Florida.

But Hammer is standing her ground. “The law should not be on trial,” she recently said. “The law did not do anything wrong.” Indeed, proponents argue that the law doesn’t apply in Zimmerman’s case. Former Gov. Bush, for one, has said that Zimmerman’s apparent pursuit of Martin means that the Stand Your Ground won’t apply in this case. “Stand your ground means stand your ground,” he said. “It doesn’t mean chase after somebody who’s turned their back.” Meanwhile, Zimmerman’s attorney, Craig Sonner, has maintained that his client was acting in self-defense but has suggested that Florida’s Stand Your Ground law doesn’t necessarily apply. “In my legal opinion, that’s not really applicable to this case. The statute on ‘stand your ground’ is primarily when you’re in your house,” Sonner told CNN. “This is self-defense, and that’s been around for forever—that you have a right to defend yourself.”

The findings of Scott’s task force are likely months away. What’s already clear, though, is that the law at the heart of the Trayvon Martin tragedy may well not have existed if it weren’t for the NRA and its war chest of political money.