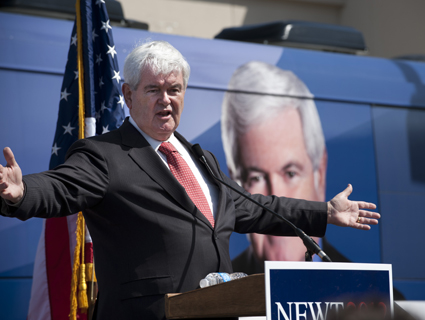 Newt Gingrich's presidential campaign is over, whether he admits it or not.Robin Nelson/ZumaPress.com

With Rick Santorum’s double win in the Deep South states of Alabama and Mississippi (Mitt Romney placed third in both), the upstart ex-senator from Pennsylvania has undeniably claimed the throne as the non–Romney in the race. As Romney’s camp keeps pointing out, the math remains on Romney’s side. But these triumphs for the anti-contraception candidate will ensure that the GOP slog continues on, with Santorum jabbing and Romney bleeding. They also show that Newt Gingrich’s campaign is dead—whether Gingrich knows it or not. At his not-such-a-concession speech on Tuesday night, he said the nation needs “a visionary leader” (meaning him), bashed the media for perpetuating the Romney-is-inevitable line, and vowed “we will continue to run a people’s campaign.” (There was no shout-out to casino magnate Sheldon Adelson, who is keeping his campaign alive by funneling millions to the pro-Gingrich super-PAC.)

But if he’s not whistling a victory tune in Dixie, he won’t be doing so anyplace else. He can stay in the race—and utter increasingly extreme remarks in a desperate attempt to gain attention—but it’s not premature to mark the end of Gingrich 2012. The only remaining question is how long he’ll fight on as a zombie. (Romney might even encourage Gingrich to stay in the contest to prevent Santorum from consolidating the anti-Romney vote.) So here’s a not-that-gauzy look back at a campaign that failed to rescue the United States at its darkest hour:

What’d we miss? Leave your favorite memories in the comments.