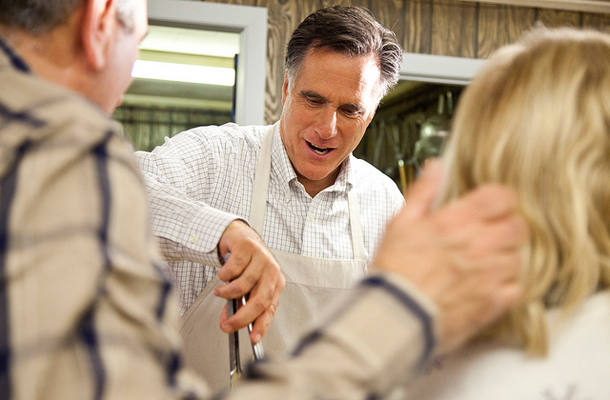 Last Thursday the internet was thrown into chaos by the discovery that 85-year-old North Dakota resident Marilyn Hagerty had written a 485-word review of the Olive Garden for her hometown paper, the Grand Forks Herald. “The place is impressive,” Hagerty wrote. “It’s fashioned in Tuscan farmhouse style with a welcoming entryway.”

What the internet didn’t know is that Marilyn Hagerty isn’t the only senior citizen to write a review of the new Olive Garden in Grand Forks, North Dakota. Mother Jones has obtained an exclusive copy of an unpublished manuscript written by Willard Mitt Romney of Belmont, Massachusetts; Wolfeboro, New Hampshire; and La Jolla, California. A notoriously picky eater, Mr. Romney’s culinary adventures have gripped the nation during his presidential campaign, as pundits have puzzled over his refusal to eat the skin on fried chicken, and his love–hate relationship with catfish.

We’ve reproduced the review in its entirety:

Let me tell you, this place is great. Is this where you folks normally eat? Only when you’re broke, that’s right. Heh.

Ann and I sat in a booth near the kitchen. There was a fireplace, a real old-fashioned hearth, in the corner, and a nice vase on the ledge. I love décor; napkins are great. The ice water was just the right temperature.

At length, I asked my server what she would recommend. She suggested chicken alfredo, and I was feeling a little rebellious so I ordered the chicken alfredo pizza. I love chicken—I love grilled chicken, I love broiled chicken, I love chicken scampi! Poultry is great. I told Ann, I said, “Did you know chickens came from dinosaurs?” And Ann just kind of shrugged. I said, “I’m being serious, Ann, not just a few of them, but olive them.” Aha. Alright, okay.

The pizza comes with Italian cheeses, alfredo sauce, and scallions. I told our server—Maria, I think her name was—I said, “Margaret, hold the Italian cheeses, alfredo sauce, and scallions.” Then I took my fork and removed the chicken from the pizza and discarded it, and then I cut the flatbread into manageable portions, and I trimmed the edges off the crust, and consumed them. Forks are my favorite utensil. I also like butter knives.

I’ve got to tell you, Ann and I went to a place in Tuscany last fall that was just like this. Well I shouldn’t say it was exactly like this. That one was was on a veranda overlooking the Mediterranean and bordered on two sides by an actual olive garden. The servers were dressed in authentic Renaissance attire, and the food was prepared fresh by a 13th-generation Italian chef whose great-great-great-great-great-great grandfather sold olive oil to Michelangelo’s grandson until they had a falling-out. I don’t quite remember the full story; something about a goat. They had a fireplace too but this one was real, not electric, and burned only lumber that had been salvaged from Phoenician wrecks. The wood gave off a faint scent of mahogany mixed with sturgeon; I love logs. You should have seen the bill—we almost went baroque! Aha, okay, ahem.

I told Ann, I said, I don’t usually eat fast food, but this is pretty good. Ann didn’t think I should say that.

Former Massachusetts governor Mitt Romney is a nationally recognized commentator on food and culture, and a Republican candidate for president. Follow him on Twitter @MittRomney.