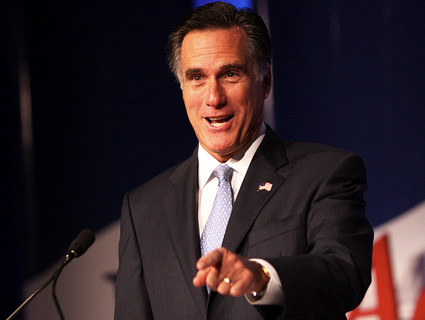 When the Republicans gather in Tampa this summer for their presidential nominating convention, there will be 2,286 delegates voting for the party’s standard-bearer. That has led to the obvious point that the magic number for Mitt Romney (or Rick Santorum, Newt Gingrich, or Ron Paul) is 1,144 delegates. Bag that many delegates, and you can declare victory. But this mathematical conclusion is only partly right. In Romney’s case, the real magic number is 1,104. That’s because the long GOP slog ends on June 26 with a primary in one state: Utah. That is Romney’s ultimate firewall.

Utah’s 40 delegates will be awarded on a winner-take-all basis. A candidate need only obtain a plurality of votes, not a majority, to bag all of the Beehive State’s delegates. And as sure as Romney is at ease with NASCAR team owners, he will coast to an easy win in the Mormon-heavy state. That means if he reaches the 1,104 count at any point prior to that final primary, he will indeed have crossed the finish line.

The timing of Utah’s primary this year is “a happy coincidence,” says Thomas Wright, the Republican state party chair. Toward the start of the primary season, the Romney campaign urged Utah GOPers to mount their presidential primary in the first months of the contest. “They wanted early victories,” Wright said.

But the state Legislature had established June 26 as the date for primary elections for local offices, and the Republican state party did not want to push for a separate primary that would cost state taxpayers $3 million, especially when the results would be a foregone conclusion. They politely sidestepped the Romney camp’s request.

Wright, like many other GOPers, is not enjoying the prolonged and nasty Republican race. “A long drawn-out cantankerous primary is not helping the Republican nominee,” he says. But he notes this is a “double-edged sword,” explaining, “Barack Obama has a $1 billion machine ready to go, and he can’t really deploy it until there’s a nominee… I bet it’s very frustrating for him.” Yes, Romney and the others are slamming each other, and on the other side, Obama is banging his fist.

Wright, though, is delighted with how things have worked out with the calendar in 2012. Four years ago, Utah held its presidential primary on February 5, Super Tuesday. Romney handily won all the state’s delegates, but two days later he quit the race. This time around, Romney may wrap up the nomination before the contest’s final hurrah in Utah. But if not, he can count on a true kick at the end of the race. “Going last could decide this race,” Wright says, “and we definitely didn’t plan this.”

So as you watch news reports on the GOP contest—with bar graphs showing delegate counts all relative to the ultimate goal of 1,144 delegates—keep in mind that Romney, with this last-state advantage, needs to reach a lesser number, for Utah has his back.