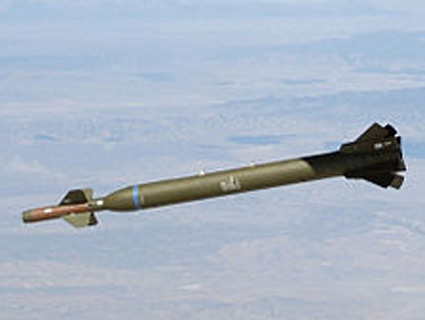 During to a recent visit to Washington, DC, Israeli Prime Minister Benjamin Netanyahu reportedly placed an order for a pair of hot items: GBU-28 “bunker-buster” bombs and some advanced refueling aircraft—weapons that would significantly improve the Israeli air force’s ability to take out Iran’s underground nuclear facilities. President Obama has since ordered Secretary of Defense Leon Panetta to work closely with Israeli Defense Minister Ehud Barak to hash out details of a potential sale, a senior US official told Haaretz. The report continues:

During the administration of former U.S. President George Bush, the U.S. refused to sell bunker-penetrating bombs and refueling aircrafts to Israel, as a result of American estimates that Israel would then use them to strike Iran’s nuclear facilities. Following Obama’s entrance into the White House, however, the United States approves a string of Israeli requests to purchase advance armament.

Just a few months after Obama took office, the president quietly approved the transfer of over four dozen GBU-28 Hard Target Penetrators. (At the time, some raised concerns that the sale might be perceived as “a green light for Israel to attack Iran’s secret nuclear sites one day.”) The Israeli government also currently maintains a limited stock of older, smaller bunker-busters, as well as a small number of refueling jets, all of which were bought from the United States.

American intelligence officials do, however, often acknowledge their uncertainty over how effective the Pentagon’s latest bunker-busting technology would actually be at penetrating the scattered subterranean chambers where the Iranian government is enriching uranium.

Also, there was a report this week in the Israeli Hebrew-language newspaper Ma’ariv—citing anonymous intelligence sources—that the Obama administration had proposed a deal to allow the weapons sale, in exchange for Netanyahu’s promise to hold off on an attack until 2013, after the messy election season winds down in November. But considering, for instance, that Israeli officials have openly floated the idea of not warning the Americans in the event of a preemptive airstrike on Iran’s nuclear installations, it’s likely that this alleged covenant is just one more bad rumor regarding regional tensions. (Naturally, at least one Israeli official has already dismissed it as such.)